From OpenStreetMap Wiki
Jump to navigation Jump to search
Tag:highway=path - Other languages

highway=path indicates a generic path that is used by pedestrians, small vehicles like bicycles, and/or animals. This includes walking and hiking trails, bike paths, horse and stock trails, mountain bike trails, as well as multi-use paths for cyclists and pedestrians or similar combinations. Certain types of paths are tagged more specifically with highway=footway, highway=cycleway, and highway=bridleway, but in many cases none of those quite fit so highway=path is used instead.

For urban paths which are intended primarily for pedestrians (potentially with bicycle=yes), some argue it's better to use highway=footway, others prefer only use highway=footway for formal footways (with a footway-traffic sign or sidewalks). Actual usage of highway=footway vs highway=path differs between mappers and areas.

A highway=path is not for use by four-wheeled (two-track) vehicles. Often the path is simply too narrow. Other times it is wide enough but such vehicles are prohibited (except for official maintenance or emergency use). A path-like way where four-wheeled vehicles are allowed, is likely better tagged as a highway=track or highway=service.

Additional tagging is highly recommended for paths. Without access and surface tags, routing engines may penalise the use of a path. Difficult hiking paths should be tagged with a sac_scale difficulty, to prevent people unwittingly choosing a route which is too difficult for them. 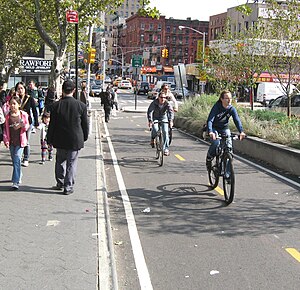 Usage of this tag varies regionally, and paths without any additional tags are common. Consequently, paths require careful interpretation by data consumers to avoid causing map users inconvenience, or worse. [2][3][4][5]

Major pitfalls when consuming this data include:

When displaying paths, especially in rural areas, maps should make clear which paths are tagged as more difficult on the sac_scale to avoid leading users along difficult routes. Also consider using the trail_visibility, informal, access and surface tags to prioritise rendering.

Routers should carefully consider the weighting of paths which don't have access or surface tags, as these could be legally off-limits or have an unsuitable surface. 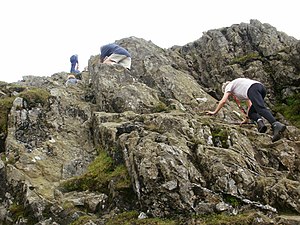 highway=path is described as a generic path usable by pedestrians, non-motorized vehicles such as bicycles, and livestock such as horses. However, for lack of a more specific tag, it has also become commonly used for steep, rugged routes that do not fit this description. On these routes (or sections) an able bodied person does not walk upright, but instead scrambles using hands and feet to proceed up or down the slope. Riding a bicycle or horse on a scramble is functionally impossible in most cases.

Because of this, usage of highway=path for scrambles is disputed and there is a lack of consensus on how to properly tag them. A proposal for a new tag highway=scramble has been made but has not gained enough support for approval: