From OpenStreetMap Wiki
Jump to navigation Jump to search
Key:cyclestreet - Other languages

Note: the text "fietsstraat" or "rue cyclable" is optional.

Current tagging policy is to not alter the highway category (leave it 'as is', based on its relevance within the routable network), but to add a key cyclestreet=yes to indicate its legal status.

During 2020, cycle streets were introduced in Finland. They improve the opportunities of cycling in urban areas. Motor vehicles can be driven on cycle street but cyclists have priority on using the street.[1]

Rules for driving a vehicle on Finnish cycle street:[2]

The road sign for cycle street doesn't imply a speed limit but speed limit is marked with speed limit signs. However, vehicle's driving speed shall be adapted to cycling. General traffic rules like driving near to the right edge of the driveway and giving way for pedestrians on marked pedestrian crossings apply on cycle street. Through traffic is allowed if there are no additional road signs disallowing it.

Rules for parking a vehicle on Finnish cycle street:[2]

Germany has a different kind of streets for cyclists (Fahrradstraßen) that are reserved for bicycles and may only be used by other vehicles when this is explicitly indicated. Often, these exceptions are for residents or one-way restrictions. These are not considered cyclestreet=yes in Openstreetmap and should instead be mapped with a different tag: bicycle_road=yes.

Latvia does not have a legal definition for a "cycle street" or any such traffic signs described in the traffic law. However, as of 2020, there is a single pilot project in Sigulda city where a section of a street is designated as a "velo iela" (lit. "cycle street") accompanied by a custom traffic sign [1] with text "Velo iela / Auto ir viesis" ("Cycle street / Car is a guest") and a 30 km/h speed limit. The relevant road portion is currently tagged as a cyclestreet=yes and maxspeed=30. 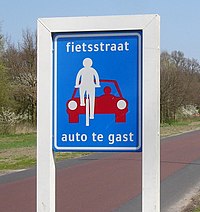 In the Netherlands this concept (fietsstraat) does not have a legal status as such, but in recent years an increasing number of municipalities have applied the concept (taginfo NL June 2020: 1476).

The idea is that motor vehicles (voluntarily) behave themselves as guests on roads marked as fietsstraat, where cyclists are considered the primary users. The fietsstraat concept mainly tends to be applied to roads below the level of collector road in residential areas, and streets with parking and residential access that run parallel to arterial roads (in Dutch: ventweg).

These cyclestreets are signed by road sign L51, as shown in the picture on the right. Historically, this sign was also called L1002. It is good to add traffic_sign=NL:L51 to the way.

Cycle streets in the United States are usually referred to as "bicycle boulevards" or "greenways". Currently, however it is more popular to tag these as bicycle_road=yes in the US.