From OpenStreetMap Wiki
Jump to navigation Jump to search
Tag:cycleway=lane - Other languages

A cycle lane is bicycle infrastructure that is an inherent part of the road, but set aside for the exclusive use of bicycles, whilst being separated only by paint or other markings, and without a physical separation from vehicles. Where a physical separation exists either use the cycleway=track tag or create a separate way as highway=cycleway.

Add to a road highway=* the tag cycleway=lane.

If there is only one cycle lane add:

If there is cycle lane on both sides add:

For a cycle track operating in the opposite direction to a one-way road, instead use cycleway=opposite_lane + oneway:bicycle=no. 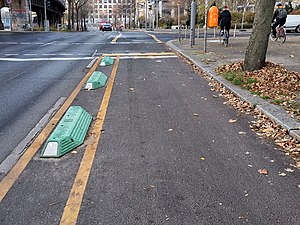 A buffered cycle lane is separated from the car lanes with extra space. This is still tagged as cycleway=lane but with cycleway:buffer=* added. For more specific tagging, the cycleway:left:buffer=*, cycleway:right:buffer=*, or cycleway:both:buffer=* variants can also be used.