From OpenStreetMap Wiki
Jump to navigation Jump to search
Key:cycleway:lane - Other languages

Subtag for cycleway=lane and cycleway=shared_lane to distinguish between the different types of cycle lanes.

There was a proposal to add cycleway=soft_lane to distinguish between exclusive and advisory cycleways, which was rejected in 2014 and then not pursued further for a time. This tag now makes it possible to map this distinction and is the outcome of several discussions in the forum.

cycleway=lane + cycleway:lane=exclusive
A cycle lane strictly reserved exclusively for cyclists, segregated from the car lanes usually through a continuous line. In most countries, this implies an obligation for cyclists to use it. 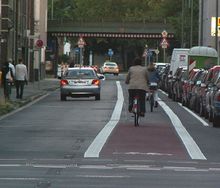 cycleway=lane + cycleway:lane=advisory
A cycle lane which is not reserved exclusively for cyclists, i.e. cars may drive over and halt on it. Usually marked with a dashed line. Often used in place of an exclusive cycle lane on roads where there is not enough space for both full car lanes and full cycle lanes, so that cyclists and other road users share the same space to a degree. In most countries where they exist, these cycle lanes are not obligatory for cyclists.
In English, this type of cycle lane is most commonly referred to as dashed cycle lane or advisory cycle lane.

cycleway=lane + cycleway:lane=doorzone
A cycle lane which is within the door zone of parking vehicles (see Dooring). This usually implies there should be a parking:lane:parallel=* on the way segment, but the converse of where parking:lane:parallel=* + cycleway=lane does not imply it is within the door zone as a buffer may be present between the cycleway lane and the parking.
Tagging doorzone with the same key for advisory/exclusive lane makes them conflict, a proposal for a new key has been made to avoid this, see Proposed_features/Key:cycleway:doorzone.

shared lane marking, also known as sharrows or pictogram corridor. Consists of only bicycle pictograms on the street which usually have no legal implications whatsoever but serve to indicate that cyclists and motorists share the road. Well known in North America and increasingly seen in use in Europe. Not to be confused with bicycle pictograms that are painted on some one-way streets to indicate that cyclists are allowed to use the street in contraflow direction.

fietssuggestiestrook), which they tag with cycleway=shared_lane. As other shared lane markings, these have no legal implications and thus are another way to indicate that cyclists and motorists share the road.
At least in Belgium, both these kind of cycle lane marking and pictogram corridors (sharrows) exist.

Usages with :left and :right