On the right a shared lane with sharrows, on the left a contra-flow cycle lane with different bike pictograms (Boise, Idaho) 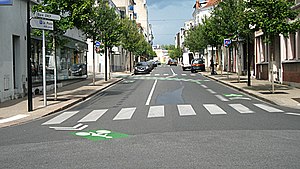 On the right a Proposed_features/cycleway=soft_lane (recommended & reserved), on the left a shared lane (Vichy, France)

The shared use is marked by repeated pictograms. Each of these pictograms my be either the classical North American sharrow, or another combination of a bike logo and a chevron or arrow, or simply a bike logo. It mustn't be identical to traffic signes used for obligatory cycleways in the same country.

The file of pictograms (in some country, the Czech Republic, called a "pictogram corridor") may be placed either central or decentral in that lane. According to the U.S. Manual on Uniform Traffic Control Devices (see linked sources), shared lane markings shall prevent cyclist to ride too near to the curb/kerb or paring cars.

There is no marked limit between cycling space and the space for motor vehicles.

"Sharrows" and "pictogramn corridors", as mentioned above, are the markings, not the lane.

In France, the shared lane is called "voie partagée".

Other types of cycling facilities on the carriageway have marked limits to adjacent car lanes: