This page contains information about mapping activities related to Iran country. Feel free to give opinions and discussions in discussion tab about things related to this page.

The Iran/Tagging rules contains a summary of mapping conventions specific to Iran. As much as possible, mapping and tagging should follow the conventions set by the OpenStreetMap community as a whole, such as indicated in pages like Map Features, Feature Index, and Editing Standards and Conventions.

The largest and most active community of Iran OSM users is currently taking place on Telegram Chat group "OSM Iran". You can join this group via our OpenStreetMapIR telegram channel.

We also have a subforum on OpenStreetMap forum, which is the second active channel to contact Iranian community.

This is a summary of humanitarian projects planned for Iran. For more detailed information refer to the links.

The country borders were imported from the CIA World Fact Book (WFB).

In September 2009 Claudius Henrichs imported the province and part of the county borders from MapLibrary.org (Link to Iran at MapLibrary.org). A new OSM-user was set up for this named iran_provinces. The manual import surfaced a large diagonal offset between ML and WFB data. To resolve this the country boundaries from WFB were kept untouched and connections to the province boundary data from ML were created manually.

In August 2016 a new project was started by Adib Yz to enhance the Province boundaries of Iran and also add County, District and Rural administrative boundary of Iran to the map. The source files for this import contains the most up to date administrative boundaries of Iran that are currently used by different Iranian organizations. These files has been obtained from Arak's Technology University under public use license.

See also the List of admin_level values for Iran.

On July and August of 2016 the boundaries for Iran's Protected Areas has been added to Iran's Map by Adib Yz. The source for these areas are the maps from WDPA and Iran's Environment Organization. The three major protection title that has been added are as follows:

Iranian Presets: Some additional presets to use with a single click: 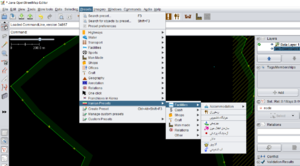