I've got infected by OSM through a fellow student of mine in late 2007 and luckily found enough white spots in Leipzig to learn about mapping. Mapping my home town in Bavaria as well as cities in Iran and other places with good Yahoo sat coverage my main motivation has always been creating and sharing free geodata within a worldwide community. Spreading the word about OSM I'm giving talks on several occasions and actively participating in my local and other country's communities.

I'm a student of computer science at the University of Leipzig and currently finishing my bachelor thesis on semantic strategies for geodata. Besides I am somewhat involved (localization, blogging, community moderation) with Skype and the Maemo/Mer community.

During the monthly meeting in Leipzig we discussed the correct placement of a public_transport=stop_position according to the public transport schema. The scenario is a bus stop next to a crossing where the bus stops ahead of the crossing in each direction e.g. on both sides of the crossing. Some mappers in Leipzig argue that the stop_position-node has to be placed at the crossing node (Variant "A" in the picture). But as far as I understand the public transport schema the stop_position-node has to be placed where the bus actually stops (Variant "B" in the picture). Quoting the schema description wiki page: 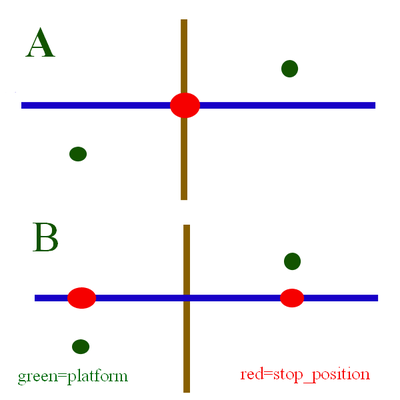 Started tagging TMC data around Leipzig with the help of the TMC Validator by Sven Anders. But I'm not sure which nodes to tag for motorway junctions: 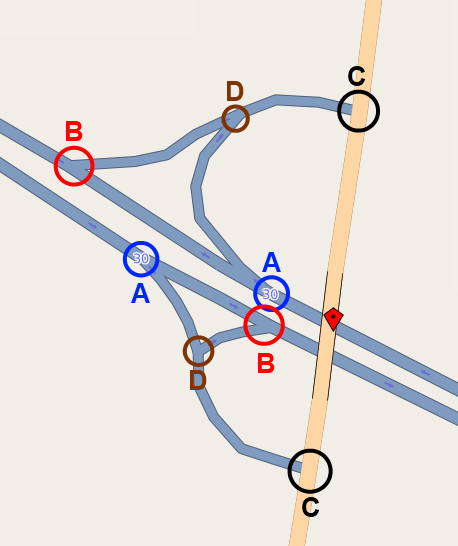 Created a little mockup for a JOSM plugin for editing opening hours (sorry, german only): 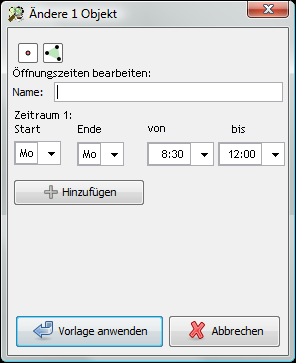 Unfortunately I couldn't got to SOTM because of university. Had to cancel the week before. Really sorry to have missed to opportunity to get to know in person more community members. Better luck next time, maybe in Münster :)

Loads of mapping in Ürümqi, chinese province of Xinjiang. Yahoo coverage is very good there and the motorway junctions with massive parallel carriageways are a pleasure to watch.

Yet the reason for that region getting my attention hasn't been as pleasant in form of violent protests taking place there in the past weeks.

Additionally with some more older GPS tracks from iranian friends the OSM data gap between Teheran and Mashhad could be filled. This making OSM data the first source of a close to the ground routing from Tehran to Mashhad *party*.

Helped organizing and took part in the Grimmapping party of the Leipzig OSM Stammtisch with great results.

Joined the OSM foundation. First as I discovered that this project really caught me long-term and secondly to get the discount on my early bird SOTM signup :P

Did some Wintermapping as part of a video shoot for the local university of applied science. Video is here.

Did loads of mapping in and around Mashhad, Iran (2.5 million inhabitants) and mapped 98% of the current map coverage myself. Unfortunately Yahoo Hi-Res coverage stops in 1/4 of the western city area. Got help of locals who sent me GPS tracks as well which helped me verify that Yahoo satellite imagery is well-placed.

Another presentation by Natanael and me introduced a very interested audience from the Geographische Gesellschaft zu Leipzig to OpenStreetMap. In return we got valuable input in what geographs are interested in geodata :P

Helped in setting up and initial mapping of Burkina_Faso and the capital of Ouagadougou. Great to see the great result of mapping together with locals.

In the past months I've been walking and cycling through Leipzig and driving by car throughout the surroundings to add details and get rid of missing street names in the region. MY new Garmin eTrex Legend HCx is serving well in this respect.

Additionally I've started in May to map Mashhad, Iran based on detailed (yet outdated) Yahoo landsat imagery (Map of Mashhad). Additionally I'm doing my part to push creating a free map for Iran with several smaller projects.

During the Barcamp Leipzig Natanael and me offered a session about OpenStreetMap which was well conceived and resulted in more projects later on.