This article or section may contain out-of-date information: The idea of the proposed tagging schema here has been put into a proposed feature Public Transport.
This page only exists for documentary purposes, to understand the development of current public transport tagging schemas.
If you know about the current state of affairs, please help keep everyone informed by updating this information. (Discussion)

This data modeling schema is a proposal for a more consistent and complete integration and visualization of public transport (PT) related data in OpenStreetMap (OSM). It was created to solve (at least most of) the numerous problems the existing modeling schema for PT related data is posing.

The proposal is the result of a community workshop which took place from 16th to 17th of May, 2009, at Geofabrik, Karlsruhe (Germany). The list of all workshop participants can be found below:

All individual aspects of the schema presented in the text below arose from the following topics discussed during the workshop:

Currently, there are some other activties within the OSM community working on enhanced modeling schemas for PT related data, too, which can be found in the transit category of the OSM wiki. Some aspects of the schema described in this proposal base upon two proposals which can also be found in the mentioned category:

In the NaPTAN category of the OSM wiki, all activities concerning the NaPTAN data import can be traced. These activities were also payed attention to during the developing process of this proposal.

Currently, the largest problem concerning public transport line-like traffic infrastructure in OSM relates to the clear distinction between different railway types. To identify a railway type as exactly as possible and thus to model it correctly, mappers can use the following decision graph to take a decision already during data collection: 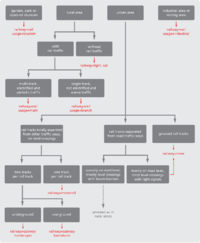 Decision graph for the modeling of different railway types

The following table lists all possible types of line-like traffic infrastructure in public transport. Apart from that, the table shows how those types are modeled in OSM according to the existing schema and how they shall be modeled in future according to this proposal. Elements, which are explained in the text passages below, are written in bold:

Multi-track parallel railways in close proximity can either be modeled as a single way with tracks=* or as a number of parallel ways. If individual tracks have different tagging requirements (electrification, gauge etc.), the tracks should be modeled appropriately. The tracks=* tag should be used to record the number of tracks with a default value of 1 being assumed where this is not supplied.

To distinguish between different types of railways for rails, in addition to railway=rail the tag usage=* shall be used – it describes the usage of a railway for rails:

Further tags for railways for rails are:

In addition to railway=light_rail, additional tags for railways for light rails can be:

Metros can be divided into two different categories:

Additional tags for railways for metros can be:

Railways for trams shall always be modeled as separate geometries, most notably when the railways are grooved. Otherwise, if only one geometry is used for a road and the grooved railway on it, additional tags cannot be clearly assigned to either the road or the railway.

Additional tags for railways for trams can be:

Funiculars did not appear as an independent category in OSM so far: From now on, they shall be modelled as ways with the tag railway=funicular.

Additional tags for funiculars can be:

Public conveyors also did not appear as an independent category in OSM so far: From now on, they shall be modelled as ways with the tag highway=conveyor.

Additional tags for public conveyors can be:

From now on, the waterways for passenger ferries shall be modeled as ways with the tag waterway=ferry_way to separate infrastructure data from network information.

Concerning the major group within the public transport point-like traffic infrastructure – the stops – it is not possible yet to model these elements in a consistent way without having to distinguish explicitly between bus stops, railway halts, tram stops etc. Apart from that, there is no possibility yet to model stop areas, which are served by multiple public service vehicles and thus consisting of more than one stop positions, as interrelated elements. Furthermore, platforms, entrances or station buildings cannot be clearly assigned to one stop yet.

Therefore, a basic model for stops shall be established: The basic structure of this model is independent from the types of public service vehicles serving a stop or the traffic way a stop is related to. The model is kept as simple as possible and allows mappers to model very simple stops as well as very complex stops with many details. Therefore, the model consists of four components: 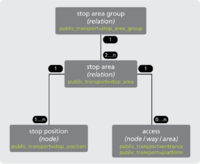 The graphic above shows that the model consists of three steps at most: A stop area (as a relation) contains at least one stop position and either no access or an arbitrary amount of accesses. Consequently, a stop area builds the relationship between all the elements it contains. A stop area group (as a superior relation) shall be used if multiple stop areas have to be combined – e.g. because they are just representing multiple parts of one stop.

Stop positions shall be modeled as nodes and tagged with public_transport=stop_position. The nodes shall be placed directly on the ways representing the traffic ways the stop positions are related to: This makes routing more easy and leads to more uniformity.

Although the described model for stops makes the stops independent from the public service vehicles, additional tags shall be used for stop positions to allow rendering systems to visualize them with adequate symbols and icons:

If those additional tags shown above are missing, the absent information could still be read out from the line relations containing the stop position. But this would be considerably more difficult to implement.

The geometry and the characteristical tag an access shall be modeled with depends from the type of the access:

Additional tags for accesses can be:

Buildings, ferry terminals, piers or other facilities can be integrated as accesses in a stop area relation, too. The existing modeling schema for those elements shall be maintained.

A stop area relation is not always necessary: It would be superfluous if it contained just one stop position as a member. In such cases, the isolated stop position shall be equipped with the tags listed above which uniquely identify it – including the tag operator=*.

A stop area group can also contain an arbitrary number of additional nodes which are representing other point-like traffic infrastructure:

Examples for the application of the model for stops

In the most simple case there is only one stop position with a name:

If two accesses are "joining" the stop position a stop area shall be created: 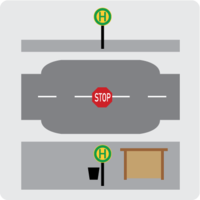 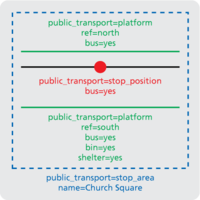 If two (not necessarily adjacent) stop areas belong to one stop a stop area group shall be created: 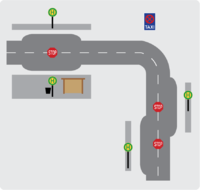 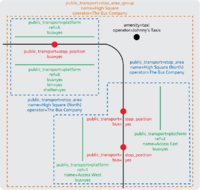 Backward compatibility of the model for stops

The backward compatibility of the model described above is guaranteed because existing point-like traffic infrastructure can be preserved – merely the meaning of those map features will be interpreted in a different way from now on: The existing map features for stops (which are tagged with highway=bus_stop, railway=halt etc.) will be interpreted as stop positions if they are placed directly on traffic ways; if not, they will be interpreted as accesses – like all the other map features for accesses already existing (which are tagged with highway=subway_entrance, railway=platform etc.). By additional tagging, more information (public_transport=stop_position, public_transport=platform etc.) can be attached to the existing map features without any problems. The stop area and stop area group relations can be created on top of the existing data.

Suitability of the model for stops

The model for stops described above is suitable for:

Public elevators did not appear as an independent category in OSM so far. As the model for stops described above is not suitable for the modeling of public elevators, those elements shall be tagged as nodes with highway=elevator from now on.

Therefore, a basic model for lines shall be established: The basic structure of this model allows mappers to easily design different types of lines as well as different ways there and ways back. The model is kept as simple as possible and allows mappers to design alternate line courses in a comprehensible way, too. Therefore, the model consists of five components:

The graphic above shows that the model consists of three steps at most: A line variant (as a relation) contains an arbitrary amount of traffic ways, stopping places and/or accesses. A line (as a superior relation) shall be used to combine all the different variants of a line.

Separate relations shall be used for each direction of a line. Those relations contain all stopping places, accesses and traffic ways as members. The sequence of these members in the ordered list exactly expresses the connection between the source location and the target location of the line in reality.

Accesses shall be included in line variant relations because of two reasons: Firstly, this approach makes it possible for pedestrian routing applications to refer pedestrians to the correct accesses (e.g. to platform F which grants accesses to subway line M). Secondly, this approach guarantees the backward compatibility of the whole model for lines, because all the existing map features tagged as stops (e.g. with highway=bus_stop) but being placed beside traffic ways can be preserved as valid relation members.

For a line variant relation, only the following tags are required:

By modeling a line variant relation, the mappers shall – apart form the topics mentioned above – consider further aspects, too: Firstly, the ways representing the traffic ways being included in the line variant relations don't have to be segmented at each stopping places. Secondly, stopping places served on demand can be assigned with the role on_demand. Thirdly, the line variants of public service vehicles running on railways shall either include the correct rail track it is running on (if individual rail tracks are modeled) or the approximately correct rail track (e.g. if three of five rail tracks are modeled) or the only rail track or the trace (if only one rail track or a trace is modeled).

There are railway lines and railway routes which shall be distinguished from now on: Railway routes are several ways that form some kind of entity, for example the railroad stretch from one city to another. Railway lines are the scheduled lines running on rail tracks, for example the subway "U96". So just as with cycle routes etc., routes are a way to bring several ways together under one name. Lines, on the other hand, are formed by vehicles moving regularly on this infrastructure.

Tags for rail lines can be:

Tags for light rail lines can be:

Tags for metro lines can be:

Tags for tram lines can be:

Tags for passenger ferry lines can be:

Additional tags for public transport networks can be: