From OpenStreetMap Wiki
Jump to navigation Jump to search
Tag:railway=funicular - Other languages

funicular, also known as an inclined plane or cliff railway, is a cable railway in which a cable attached to a pair of tram-like vehicles on rails moves them up and down a steep slope, the ascending and descending vehicles counterbalancing each other. The tag railway=funicular is also used for similar inclined railways where the vehicle(s) are moved by cables, but which are not necessarily a funicular from a technical standpoint, for example the Montmartre Funicular, or the Kek Lok Si inclined elevator.

Other attributes that are brought into this context

The cable car station is mapped with points

at both ends of the cableway. These points should be marked with railway=station and station=funicular. 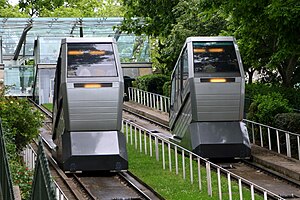 Montmartre Funicular that is technically a double inclined elevator, mapped as funicular

Difference between short funicular (tagged as railway=funicular) and inclined elevator (tagged as highway=elevator way) is not always obvious.