From OpenStreetMap Wiki
Jump to navigation Jump to search
Key:motorroad - Other languages

The tag motorroad=yes is used to describe highways that have motorway-like traffic rules and access restrictions (e.g. cyclists and pedestrians banned), but that are not a motorway. Depending on the country, this may imply various access restrictions and other road properties.

This key is originally intended to correspond to

Sign E, 6a in the Vienna Convention on Road Signs and Signals, which is officially described as "Signs notifying an entry to or exit from a road on which the traffic rules are the same as on a motorway". [2] However, as road-related tags are generally global in scope, this key could also apply to an analogous sign in a country that is not a signatory to the Vienna Convention.

Tag a highway that is a motorroad with motorroad=yes in addition to the highway tag, which will usually be highway=primary or highway=trunk but not highway=motorway.

Depending on the jurisdiction, the meaning of "motorway-like traffic rules" can technically encompass a variety of routing-related considerations. Some of these considerations are mentioned in country-specific sections below as "implied" tags. Due to unreliable software support, consider supplementing this key with explicit tags about access restrictions, speed limits, etc.

Motorway-like traffic rules, such as access restrictions, turn restrictions, and speed limits, are important for routing and widely understood by routing engines. However, motorroad=* is more obscure and not as widely supported. Due to this tag's diverse and sometimes ambiguous application on roadways, even routers that do support this key are not guaranteed to infer all the tags listed on this page.[1]

In some regions presence of this key may be used to guess values of other tags. It may be foot=no, bicycle=no, moped=no, horse=no.

The implied tags on motorways and motorroads:

The implied tags on motorroads:

In Finland, the tag indicates whether a road is a Moottoriliikennetie.

In Germany, the tag indicates whether a road is a wikipedia:de:Kraftfahrstraße (§18 StVO). Only motor vehicles which are be constructed to be able to drive faster than 60 km/h ("bauartbedingte Höchstgeschwindigkeit") are allowed.

It is now used for Tunnel Area by some, per Cap 368A Road Tunnels (Government) Regulations, and other legislations for BOT private tunnels. Despite this naming, it is not used on all tunnels (viz Lin Cheung Road Underpass is a significant tunnel with exposed sections, resulting in similar restrictions without being a Tunnel Area) , nor limited to sections with tunnel (see East Kowloon Corridor, or Heung Yuen Wai Highway north of Cheung Shan Tunnel).

Due to historic usage and original guidelines, the status quo have them as highway=motorway, rather than highway=trunk or other normal functional classification. Excluding 485404214

36072108 Discovery Bay Tunnel (highway=secondary). This may be migrated away in the future.

This indicates a road which is mainly built for motor vehicles, with motorway-like design, no footpath and pedestrian/bicycle/learners banned by presence of road sign but itself not a motorway.

However, if the road itself is in motorway-like design, but foot and bicycle are allowed on that, foot=yes/bicycle=yes may be added.

This is at odds with the definition of legal designation and signage of this tag, as raised in Talk:Proposed features/Motorway indication#Already exists (with an inferior name)?. Tunnel control area may be more suited to this.

Such usage have been removed in 2022.

In Italy, the tag must be used when one of the following road signs is present:

In the Netherlands, motorroad=yes is used to indicate

autowegen. It is used in combination with highway=trunk. See NL:The Netherlands roads tagging for more information.

motorroad=yes has the following implications:

In Norway, Motortrafikkveg (prev Motorvei klasse B) is a property of a way when signed with

. Only used on trunk and primary. May or may not be a dual carriageway. Can be as little as two lanes. Default maxspeed=* is, like any other non-urban road, 80km/h. Other speeds will be signed. Access (Trafikkreglene §4-2): foot=no, bicycle=no, moped=no. There is no minspeed, but any vehicle must be able to drive at least 40km/h on a flat road.

In Spain, the tag indicates whether a road is a Vía para automóviles

, or other type of road with similar restrictions. Autopistas

are not usually tagged with this tag, as they are tagged as highway=motorway.

Note: The sign is de facto not used for any roads in Turkey, therefore usage of this tag is discouraged. Please tag with signs that already present at the road.

You can use the key on British primary routes with motorway-like access restrictions signed or similar (according to GOV.UK Transport). Examples include the A40 Westway, the A12 between Wanstead and Hackney Wick, and the A13 between Dagenham Dock and Thurrock.

You need to add motorroad=* manually because all classes of traffic may use British primary routes by default.

Unless specified (such as the speed limits at the Blackwall Tunnel in London), the tag implies the following: 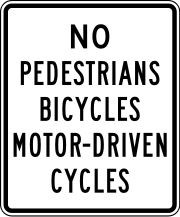 An example of a selective exclusion sign that is used for a similar purpose as the motorroad signs elsewhere on this page.

Some states have signs about "limited-access highways", but these signs indicate limits on where someone may enter and exit the roadway, not the modes of transportation for using the roadway.

In many U.S. states, state law technically distinguishes between expressways and freeways (i.e., motorways) but does not formally tie the expressway classification to a set of access restrictions. Instead of the motorroad symbol sign used in many Vienna Convention countries, the MUTCD specifies a "selective exclusion sign" that explicitly lists the prohibited modes of transportation. [3] The exclusions can differ between two expressways in the same state, so always add explicit access tags according to the specific exclusions on the sign posted at entrances to the expressway. Despite the absence of classification-based access restrictions in the U.S., motorroad=yes has sometimes been applied in addition to the access tags on various highway=trunk and highway=primary ways, which typically happen to be expressways.

expressway=yes is commonly used in the U.S. to explicitly tag an expressway, regardless of road classification or access restrictions. This tag supports the common American cartographic practice of displaying expressways with a distinct color or line pattern. Historically, highway=trunk has often been interpreted to correspond to expressways in the U.S., so the need for a separate tag was often overlooked. However, as of 2021, there is a proposal to expand the definition of a trunk road to include non-expressways, making expressway=yes necessary for distinguishing these high-performance roads from conventional surface streets.

This key has a different meaning in Vietnam than in most other Vienna Convention countries, because the motorcycle remains the primary motorized vehicle on the road. As of 2021, motorroad=yes has been tagged on roads posted with

. (For example, all the carriageways visible from [4] are tagged motorroad=yes despite the differing access restrictions.) The values of motorcar=*, bus=*, and motorcycle=* cannot be reliably inferred, but in any case, foot=no and bicycle=no are likely implied.

"Motorroad" is not defined in Japan. (Proposed "JapanTagging/RoadTypes/motorroad" was rejected.)