From OpenStreetMap Wiki
Jump to navigation Jump to search
Key:expressway - Other languages

An expressway is a highway that is designed for high-speed travel but lacks some of the characteristics that enable a motorway (freeway, highway=motorway) to accommodate a high volume of high-speed traffic safely. For the purpose of this key, an expressway does not necessarily match local colloquial definitions of the term "expressway".

A defining characteristic of an expressway is that there are inconsistencies along the length of the highway. In general, an expressway overall:

An expressway may connect to some major roads via link roads (ramps) at grade-separated interchanges but may have at-grade intersections with other public roads, with or without traffic signals (highway=traffic_signals). This contrasts with motorways, which are completely grade-separated.

The term "expressway" is well-established jargon in traffic engineering that essentially matches the definition above. The term "expressway" is used in the Manual on Uniform Traffic Control Devices (MUTCD) and other publications of the Federal Highway Administration. For example, the Highway Performance Monitoring System defines an expressway as:

A divided highway facility with partial control of access[1] and two or more lanes for the exclusive use of through traffic in each direction; includes grade separations at most major intersections. [1]

It is up to individual highway departments to classify a road as an expressway, apparently based on rigorous guidance in the Highway Capacity Manual published by the Transportation Research Board of the National Academies of Science. Based on the MUTCD's specifications, expressways are partially signposted in some cases but not all. The fact that some are signposted at all aligns the concept with the Verifiability rule, but in order for the tag to be useful to data consumers, it needs to be applied consistently across a road network, even where the expressway is implied.

expressway=yes is primarily intended for rendering. This key originated in the United States, where road maps conventionally distinguish expressways from freeways and conventional surface streets by a distinct colour, line treatment, or both. This distinction allows maps to highlight convenient routes through areas underserved by freeways but also caution motorists that these convenient routes may be less safe and provide a poorer experience overall. If a surface road is being upgraded to an expressway in short segments, or if an expressway is being upgraded to a freeway in similar fashion, it would appear as alternating bands on a conventional map, without regard for consistency along the whole road. This alternating effect is to be expected on maps that distinguish expressways, but not on maps that distinguish roads only by their road classifications.

As with some other aspects of cartography, such as highway classification, expressway tagging can be somewhat subjective. Therefore, this key is more appropriate in countries where expressways are explicitly signposted (even partially as in the U.S.) and supported by traffic engineering practices or cartographic conventions.

Routers need a way to distinguish turn channels from ramps, both of which can be tagged as highway=trunk_link. Ideally, a router would announce turn channels along surface streets as turns at the associated intersections but ramps along freeways and expressways as entrances or exits. Historically, routers such as Valhalla inaccurately relied on highway=trunk_link connected to highway=trunk to represent an expressway that is more likely to have ramps than turn channels [2], but this assumption fails if highway=trunk is tagged based on connectivity.

If a user chooses to avoid freeways when requesting a route, routers also try to avoid expressways due to similar characteristics. Historically, routers such as OSRM have inaccurately relied on highway=trunk and highway=trunk_link to detect expressways for this purpose. [3]

If a highway=* way meets the criteria above and there is local consensus that expressways should be tagged explicitly, add expressway=yes to the way. If it is a highway=trunk way but the road does not meet any of the criteria for an expressway, you can use expressway=no to prevent data consumers from assuming it is an expressway for historical reasons.

In addition to expressway=*, consider adding more objective tags to justify your tagging and assist routers:

Add access tags to clarify who can use the road. motorroad=yes may be an appropriate access tag in some regions, especially those that are signatories to the Vienna Convention.

Curacao (Kingdom of the Netherlands) 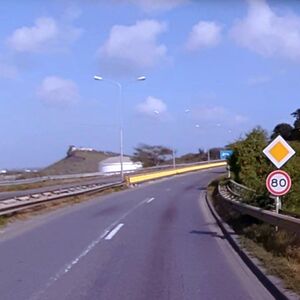 Traffic sign in Curacao indicates motorroad speed limit of 80 km/h, but this is not a motorroad and the default speed limit is 60 km/h.

In Poland, tag expressways as motorroad=yes instead of expressway=yes[3] because Polish expressways have access restrictions similar to motorways.

The standard sign warning about the end of an expressway.[4]

In the United States, the expressways in a given state or county do not necessarily correspond to a single road classification or designated route network. An expressway may be built for a variety of reasons, including as a stage of construction before upgrading to a freeway, as a workaround for lack of space, or as a political compromise. When an expressway becomes a conventional surface street, the MUTCD calls for a large warning sign to indicate the end of the expressway. Otherwise, the entrances to an expressway are not signposted as such, so an expressway that connects two freeway segments would not have any sign explicitly referring to it as an expressway. However, the road would have guide signs in the style that the MUTCD reserves for freeways and expressways as opposed to conventional roads.

Public awareness of the term "expressway" varies across the U.S. In western states, such as California, a typical motorist is familiar with the distinction between freeways and expressways and uses both terms regularly. Elsewhere, "expressway" has a much broader colloquial definition that is not covered by this tag. As a standard street suffix, it can appear in the name of a variety of roads from freeways to conventional surface streets that lack access control,[1] grade-separated interchanges, or high-speed design. Do not confuse this colloquial definition with the technical one above.

Regional variation in road design can also be a deciding factor. True expressways are rare in the northeast United States, however some roads such as US 11/15 along the Susquehanna River in central Pennsylvania, as well as parts of US 22 in western Pennsylvania, can be said to be "expressways" relative to the typical regional road network.

expressway=yes can also refer to a "Jersey freeway", which is a divided road (typically a jersey barrier and narrow overall footprint) with high-speed design and grade separations. Unlike a standard expressway, however, it does have frequent access to adjacent properties, but has few or no at-grade intersections with other public roads.

Unlike motorroad=yes, expressway=yes does not imply access restrictions by default. Explicitly add access tags to an expressway based on signs posted at entrance ramps.

As far back as 2009, there was consensus among mappers in the United States to tag expressways as highway=trunk, regardless of connectivity. This U.S.-centric definition of a trunk road has been questioned on numerous occasions even by U.S.-based mappers, in part because it leads mainstream renderers to treat some Midwestern road networks inconsistently. In 2021, an extended discussion in several venues led to a proposed redefinition of trunk roads that would divorce it from the physical characteristics of an expressway, relegating this distinction to a secondary tag.

The idea for a dedicated key for expressways came out of a 2009 essay by a mapper from Ohio, where expressways are common but motorists have no colloquial term for them. The following year, this key was introduced on 200 ways and a a formal proposal was discussed. Neither it nor a companion proposal about substandard or isolated motorways ever came to a vote. Nevertheless, the key began picking up usage in early 2012, increasing to about 1,400 ways in Ohio and Texas before levelling off. It spread to Pennsylvania in 2017. In 2018, usage began to climb at a much faster pace. [4][5][6] This increase was noted in early 2021 in a discussion about whether the key would also be applicable to Brazil. [7]

iD's Trunk Road and Primary Road presets have an "Expressway" checkbox when the selected feature is located in the United States. [8]

OpenMapTiles exposes this tag in its transportation layer. [9] OpenStreetMap Americana renders expressways with a double casing, colored red or black depending on the road classification. [10]

Requests have been filed by mappers in the U.S. for support in other software projects: