From OpenStreetMap Wiki
Jump to navigation Jump to search
Tag:dual carriageway=yes - Other languages

The tag dual_carriageway=yes has been used to specify that a highway is a dual carriageway or divided highway: a road with a dividing strip or barrier between the traffic in opposite directions. The carriageways in each direction may be divided by an open strip, central reservation or median of grass or bare ground, or by a barrier such as a low wall, fence or hedge. Usually there are two or more lanes in each direction. Note that this tag is not used for motorways.

Majority of uses are currently by one user in Krakow, Poland, as of late 2020[1]. A typical dual carriageway is not using this tag. 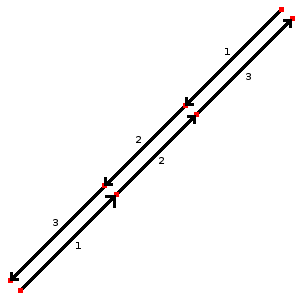 Add the tag dual_carriageway=yes to a way which is tagged as a highway=primary, highway=secondary or other highway=* feature.

There is no known, reliable and automatic method that would allow distinguishing whether oneway=yes is oneway road or a part of bidirectional roads mapped as two ways. For example there are dual carriageway highway=residential[2].

Practical use includes distinguishing roads where bicycle contraflow is missing from ones where it is not needed[3]. And special rendering for such roads in maps of a high detail[4].