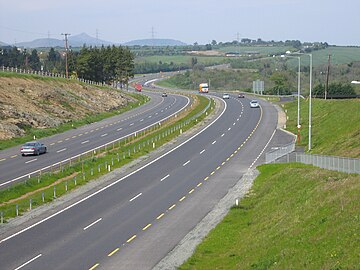 The dual carriageway N11 in Ireland.

A dual carriageway with a median that adjusts in width to accommodate turn lanes.

dual carriageway (known as a divided highway in American English) is a road with two carriageways (roads in each direction) that are physically divided by a non-road barrier, median, or other obstacle. This is done to separate high speed traffic, allow usage of the middle of the road, or accommodate new lanes. Motorways/expressways, trunk roads, and even lower classifications of roads are often split and defined as dual carriageways. This page explains the definition and mapping of dual carriageways in OSM. Government transportation departments or other organizations may classify dual carriageways differently.

A dual carriageway is mapped with two oneway

Ways tagged with oneway=yes. The median in the center could be tagged as area:highway=traffic_island according to proposed features/Street area (traffic_calming=island + area=yes is often used without regards to whether it may be considered as "traffic calming" by causing lateral deflection).

Link roads that connect the two carriageways (e.g, a u-turn lane through the median) can be mapped as the appropriate highway=_link.

Multiple dual carriageways present at I-405 at CA 19.

East Grant Road in Tucson, Arizona is not a dual carriageway because of it does not have any physical barrier in between the lanes.

If a road contains any of the non-appropriate elements for some short distance, but is still separated by a physical obstructions along other parts of the road in the vast majority of its length, then the road can continue to exist as a dual carriageway for the moment. These exceptions are typically easy to recognize, and may be kept in-thought of ease of recognition, routing, presence, and functionality of the road, in lieu of more detail. Other exceptions have been made by some users for dual carriageways such as roads like Super twos found in the U.S. Later on, when they are to be micromapped, the sections concerned can be changed back to a single

with appropriate tags such as change=*.

That being said, when a new dual carriageway is created, extra attention can be taken to avoid drawing 2

pass the physically separated sections. This would more accurately represent the road's real layout from the beginning, eliminating the need to wait for iterative refinement at some future time.