Street should have double representation:

2. Areas for vizualization and advanced routing over areas (already standard in PC games).

This is the same approach like in case of rivers with use of midline or area for different zoom levels.

By use of this concept streets in very high zoom levels can be more exactly represented in high zoom level. As well as complex intersection areas, parking and service ways. An real example, realized for service areas: 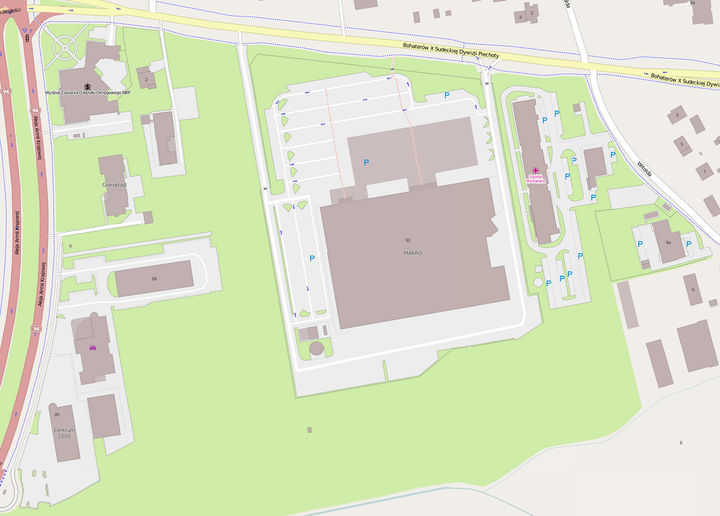 The common approach for the calculation of road surfaces is the grafic representation of the street centerlines in different renderers is still a width of street assumed according to the category of road. Since road widths vary, especially near complex intersections, such global assumption can impossible reflect accurately the reality: 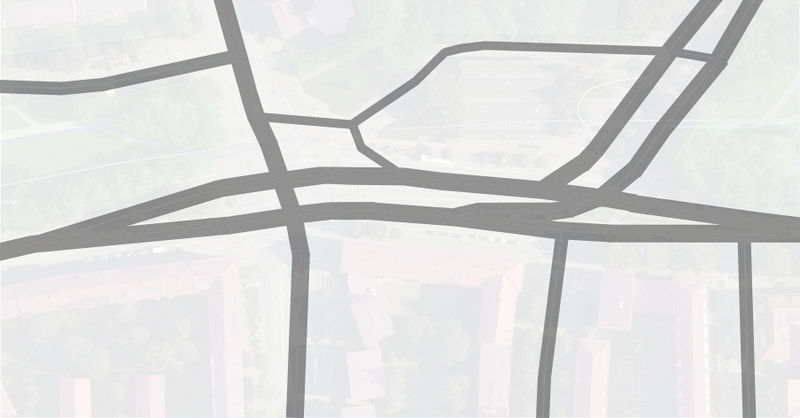 The existing approach, highway=* with area=yes can be extended with addition of drawing street surfaces with the tagging:

It seems to be helpful to collect information about of the type of road, in particular for area:highway=footway/cycleway because this information can be easily used for different rendering of the map.

What is definitely not necessarily? Street name=*, number of lanes, surface, smoothness, maxspeed, address names etc. These attributes are a part of highways and can be extracted.

Don't use name=* for the area:highway=*. The names are inscribed in the streets. It leads to unnecessary labels.

Streets are represented only by polylines. (midlines of the streets) 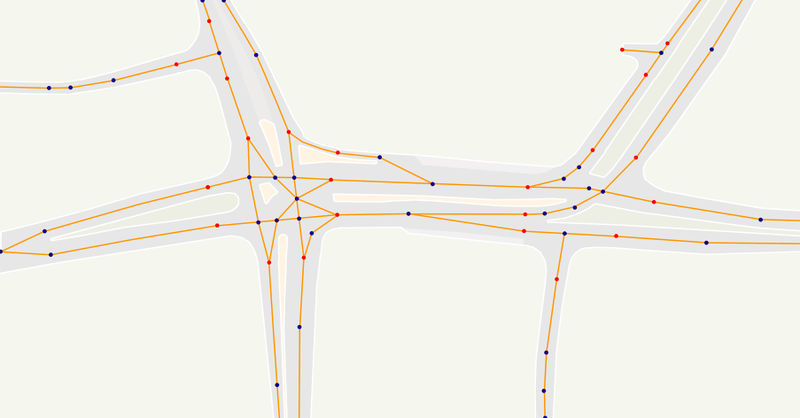 Dividing of streets in areas 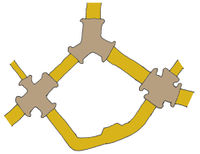 This principle should be used, when 3 or more polylines meets one point (crossing).

The consequent use of the "Plumber Principle" for mapping is the main difference to the very similar proposal:

In case of an intersection of two or more roads with different classes, e.g. tertiary and residential the area:highway=* gets the value of the street with higher priority and additionally tag junction=yes

Drawing of some crossings are not necessary. For instance, inside of cities: crossing of service roads with other road classes. The same outside of cities with highway=track and highway=* (e.g. tertiary)

(Crossing areas are in the most cases flat and horizontal. This fact can be used for more realistic 3D visualization).

Rendering of bridges with more separates lanes can be optimized in high zoom levels by use of this concept:

Bridge as area includes the areas of other ways: 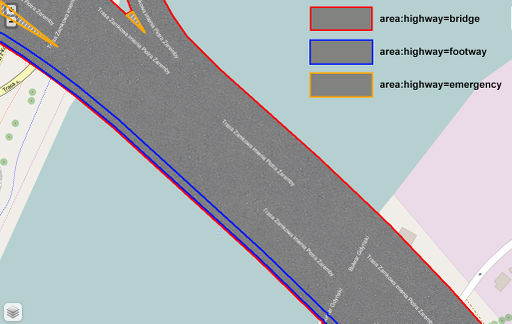 This allows in in future use of bridge area, man_made=bridge, for 3D rendering purposes.

Road surfaces are drawn as areas according to the pattern shown. Of course this is only possible where excellent aerial view exists. 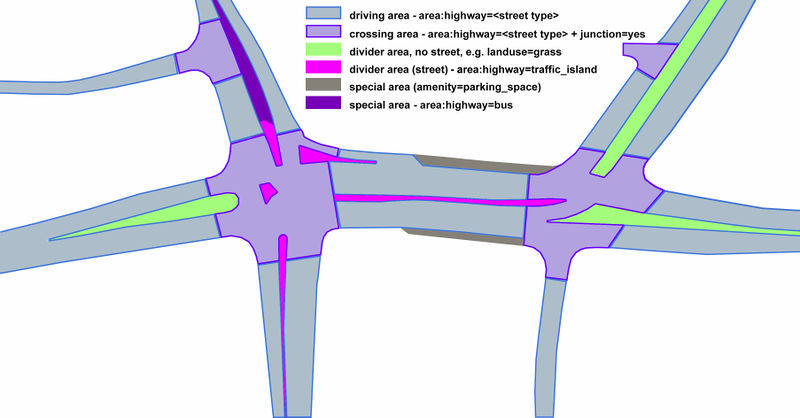 When drawing the lines inside a barred area (area:highway=emergency), renderers should take into account any direction=* tag on such areas. Permitted values are angles and cardinal directions.

Use of plumber princip for rendering optimization

The connection points are necessarily for optimizing of rendering of street outline shapes (white line, stop lines etc. or no divider lane)

Points, located on the axis of the street called later in the text K (in the figure above points in red), are also points of areas area:highway=*, tagged as crossing:end=yes in cases if they have no other tag e.g. highway=stop.

Short excursion how to render lanes 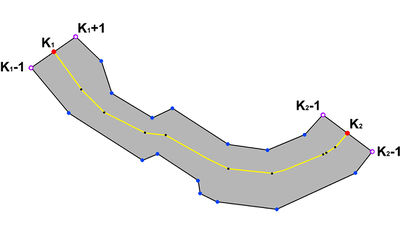 No tagging for left: and right: or value: none means, on the left and right from point K rendering uses tha same color/texture like for the street. Means: no outline shape for these vectors. 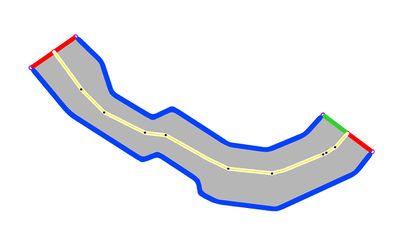 Assuming that the number of lanes of the highway: (tertiary, secondary, primary, residential..etc.) between the points K1 and K2 is known, can be rendered by use the outline of the Street as the border to approximate geometry of lanes. Here an example with 6 lanes:

The orientation of "red line" on the left and right of node "K" may be different than 90°. The direction shows the real existing stop line direction of the street surface. 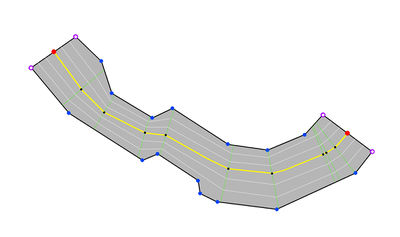 Green lines are not visible on the rendered road: they are only construction lines and should illustrate the construction principle!

This example shows why it is neccesary to divide streets, especially Y-Junction in separate areas. "Crossing" areas are areas without rendering of lanes, because of two and more vectors in the same area.

Dividing of street in areas 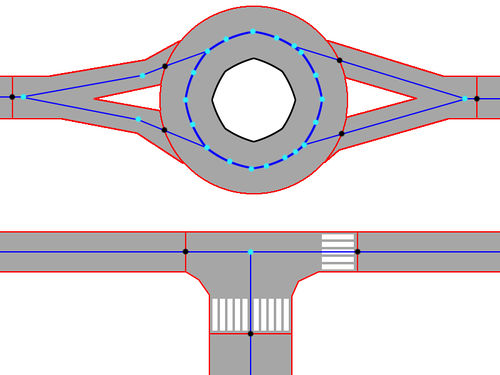 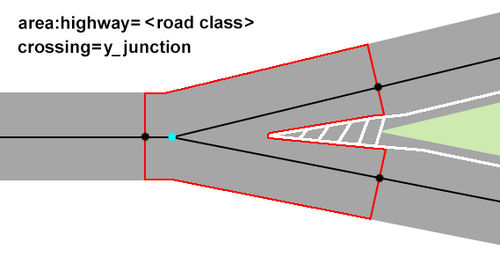 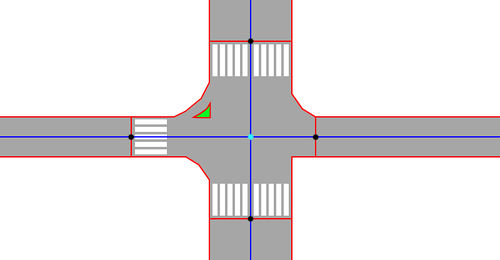 Double X-Junction with greenery in the middle: 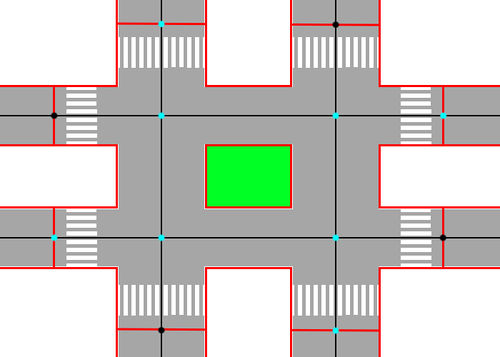 Note: only footways inside of area:highway should get additionally notation footway=crossing

lane types for rendering of point K and stop_line

Note: Some countries have specific street furniture symbols, especially for crossings (e.g. colour). Those symbols can be added to the list above and used for better visualization.

The both next points on the left and right of K on the street area shape MUST be an element of the outside edge of the streets.

Q: Why the common point of street and area K should be drawn? One could determine the line to be drawn at right angles?

At: There are often street crossings, in which the stop lines are not at right angles to the road, so it's the only possible way to get topologically correct image rendering.

Lane dividers along the street

Mapping of lanes is described under: Motorway_with_links_and_destinations

In connection with the known number of lanes which are an attribute of a way, and the information about the type of the street area outline (corresponding tags must be defined, for example: outline=solid line, outline=dashed line) an realistic image of the road space with the street painting can be rendered.

The precondition for this is the appropriate tagging of the point K. This tag cancels the rendering of street area outline between points K-1 to K+1 and replaces it with one or two tags attached to the point K.

Thus allows rendering e.g. of the stop lines or other country-specific symbols in crossing areas. 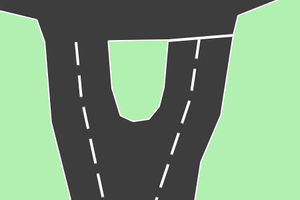 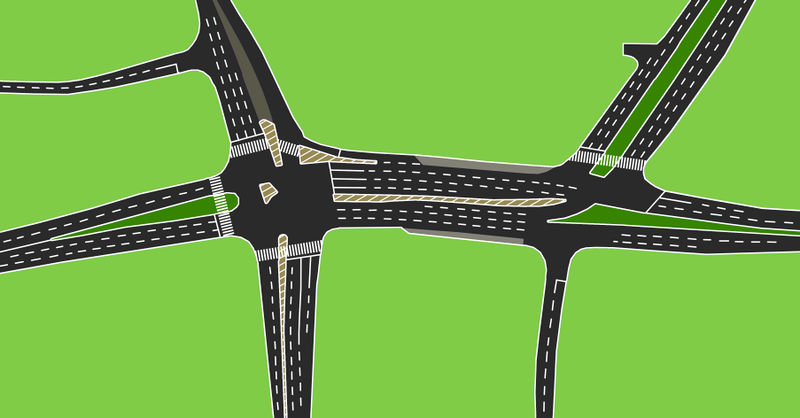 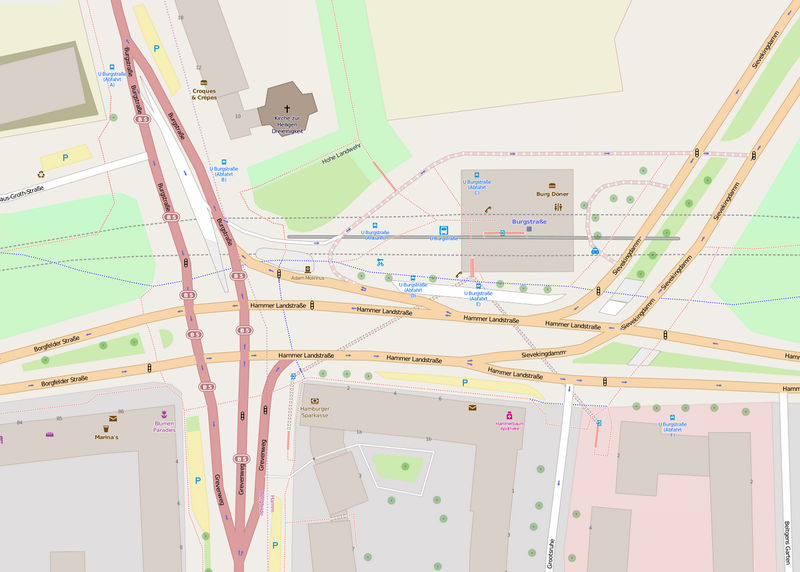 Please note: the most K- points in the example above have the same value on the left and right side, except the stop points on the T crossing right down or left top.

Ths point should be tagged with: right=solid_line. left=none is not necessarily,

shows on the other hand another: I know this situation, it is not a mistake, nothing is here forgotten.

Tagging of the point K. Comments

No tagging for Left: or Right: means: no special line left or right from K. Surfaces have the same color like the street surface.

Example of the mkgmap polygon style code for the Openfietsmap (cycling map): 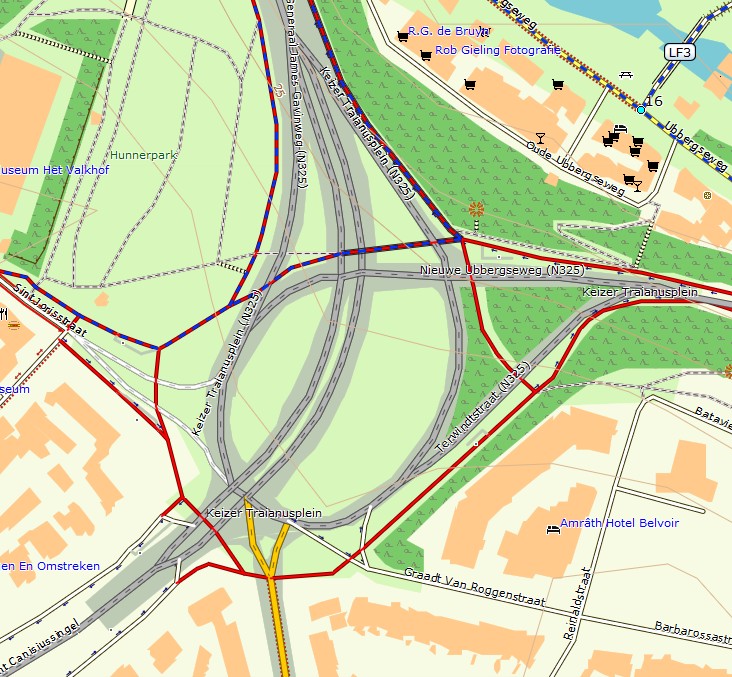 The problem below can not be fixed with assumptions about street width. 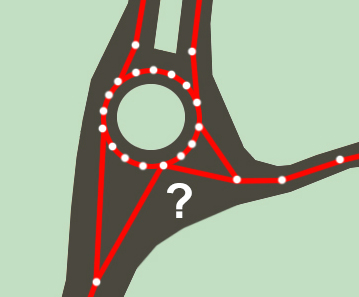