Cycling in the United Kingdom

This page highlights what is different about Cycling in the United Kingdom and gives local tagging guidelines where appropriate. 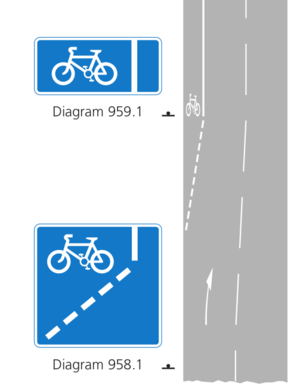 Cycle lanes within the carriageway are marked out by a painted boundary line on the road surface. The cycle lane may be "Mandatory" or "Advisory". The key differences are as follows:

A cycle track may or may not follow a road. For those that are adjacent to a road, in contrast to lanes, a cycle track is physically separate from the main road carriageway. The separation may be a kerb, barrier/wall, strip of grass or just a row of parked cars.

To map a cycle track adjacent to a road you may add the cycleway tag to the highway, however it is generally accepted that drawing the cycle track as a separate way allows greater flexibility. Please note that when using highway=cycleway, omitting the surface=* tag implies it is paved and when using highway=path, omitting the surface=* tag implies it is unpaved. Note also that explicitly tagging surface is always better, especially as for bicycles some unpaved surfaces (compacted) are better than some paved ones (cobblestones). Pedestrian use is also assumed, therefore you do not need to add a foot=* access tag unless pedestrian use is expressly forbidden.

* : The route is not intended for pedestrians, but use is not prohibited. Before tagging as foot=no please check that there is a convenient alternative route for pedestrians nearby (e.g. a footway or road).

Sustrans and the National Cycling Network

Co-ordinated by Sustrans, the UK National Cycle Network (NCN) links most parts of the country with special traffic-free routes and quiet country lanes. It has its own numbering system roughly analogous to the road network. The network is mapped on Sustrans' own site, but is derived from Ordnance Survey mapping.

Sustrans Connect2 won the Big Lottery's 'Living Landmarks; The People's Millions' competition on 12 December 2007. It is/was a project to create new cycle and walking routes, bridges and other facilities in 79 locations around the UK.

Sustrans provided a list of Millennium Mileposts and artwork installed along the cycle network. The mileposts come in one of four different types.

CycleStreets is a major user of cycling-related data in the UK area. Information on its interpretation of tags may be of interest (and the developers strongly welcome feedback on this).

CycleStreets has produced a fully-designed and downloadable 'Get mapping' guide, with particular focus on adding data for improving bicycle routing.

TfL say that OSM is the most-frequent way that their data gets used, that is, they are more likely to get their information used if they add it to OSM than publish it as data files or their own API.

In 2019 TfL completed a detailed survey of cycling infrastructure in London resulting in the TfL Cycling Infrastructure Database. Following consultation with OSMUK an independent consultant was commissioned to report on which parts of the database might be imported and how.

The relevant legislation is

Local Government Act 1888 s85 https://www.legislation.gov.uk/ukpga/Vict/51-52/41/part/V/crossheading/regulations-for-bicycles-c for England and Wales, specifically declared bicycles & tricycles etc as carriages for Highways Acts effectively making illegal the riding of a bicycle on a footpath

Councils and other authorities may make orders which allow cycling on footways and footpaths.