From OpenStreetMap Wiki
Jump to navigation Jump to search
Key:hov - Other languages

high-occupancy vehicle lane) tag is used to indicate vehicle occupancy requirements for a way. Access limitations of this type may be known as carpool, diamond, transit, T2, or T3 restrictions depending on the locale.

As with related keys hgv=* and bus=*, hov=* sets OpenStreetMap access permission for all lanes of that way, overriding whatever permissions may exist by default on that way, or have been set higher in the access permission hierarchy. If some lanes on the way are HOV restricted differently (for example, common on carriageways), hov=*, if used, should be supplemented with hov:lanes=* for per-lane access and restrictions.

For all possible values, see access=*. Most commonly used are:

hov:lanes=* is used in cases where some lanes of a way have different HOV requirements from others. Lanes, the article describing tagging individual lanes of a road, fully describes how to do this.

That said, here are two examples of how lanes might be tagged.

This is a one way road with four lanes, where the leftmost of the four is designated for 2+ HOV traffic. HOV vehicles are allowed in all four lanes. Note that with highway=motorway, motor_vehicle=yes is almost certainly implied, so we must also restrict regular motor vehicle traffic from the leftmost lane. The motor_vehicle=* restriction, higher in the access restriction tree, is combined with the narrower hov=* allow permission, so '"all" motor vehicle traffic cannot use the leftmost lane, but HOV 2+ traffic is designated for it.'

In this case, we use the fact that highway=motorway has certain default permissions, specifically, motor_vehicle=yes, and hov=yes. We do not have to specifically tag the way with motor_vehicle=yes, nor hov=yes. A lane whose access isn't specified (there is nothing between the two || symbols) will use the defaults, which in both these cases, are yes. The two examples above are functionally identical.

In the common case of two driving directions either :forward or :backward is added to the end of the key.

As stated above, please reference Lanes for a complete specification on how to perform HOV access restriction on a per-lane basis.

HOV lanes can be visualized during editing with the style Land and road attributes using the key hov:lanes=* and a lane-value of designated. The following screenshot shows a motorway tagged with hov:lanes=designated|yes|yes|yes|yes and hov:minimum=2. 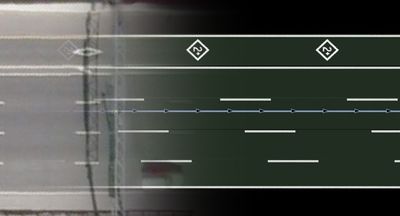