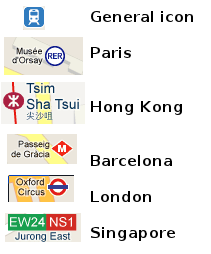 Example of subway in OSM

This proposal is a similar idea than the Road signs in the United States proposal. Basically it will allow (similar to what Google does already) to add a local/more recognizable icons for most subway/metro in major cities.

Also, is not only a matter of design beauty into the maps, but more important is to make those maps more recognizable to the final user that normally see those icon on the real life when they use that transportation.

Since the purpose of the trademark is to prevent confusing usage on commercial signs, I believe that by using the icons with their real meaning (the indication of the public transportation location) it shoudn't originate any legal act. --Capiscuas 16:24, 16 April 2012 (BST) (To be asked in the [OSM-legal-talk] mailing list.)

A trademarked graphic may also be copyrighted, if it has sufficient creativity. This is often claimed because of the difficulty and expense of securing trademark registration for the graphic.

For example about the London Underground roundel icon at wikipedia it is stated that This image only consists of simple geometric shapes and/or text. It does not meet the threshold of originality needed for copyright protection, and is therefore in the public domain.

For example in the case of the London roundel, the OSM team seems to have been granted permission to be use it.

I believe that if OSM needs permission from each of the major subway companies/institutions, please post here the conclusions of the email-exchange with them and in case of granted permission, add them to the list.

As proposed at the Road signs in the United States proposal, the use of the tag ref_icon seems intuitive.

Probably this should be chosen by the renderer, e.g. Mapnik/OSMARender, not hardcoded in the OSM data. Also the renderers shoudn't activate this icons by default, instead they should let the (trough some flag in the options of the renderer) to be switched on/off depending on the permissions of the layer responsible to display that icon.

e.g. Let's say www.openstreetmap.org has permission to use the London Underground icon, so it will activate the icon to be used by Mapnik on the Standard Layout for example.