The traffic_sign=* tag is optionally set to an ISO 3166 country code followed by a specific sign code. The source for most sign codes in the U.S. is the Federal Highway Administration's Manual on Uniform Traffic Control Devices (MUTCD). The designs are detailed in a separate document, Standard Highway Signs and Markings (SHSD).

Unlike in other countries, the national standard is not mandatory nationwide. Several states substitute their own state-level MUTCD standards; many other states supplement the MUTCD with state standards. Regardless, in a given state, most sign codes match the national standard. State-specific sign codes represent at most a small fraction of the signs in a given state.

Refer to the MUTCD field guide for the standard code for an unfamiliar road sign you see in street-level imagery, as well as suggestions on how to tag the infrastructure, advisory, or regulation that it indicates. 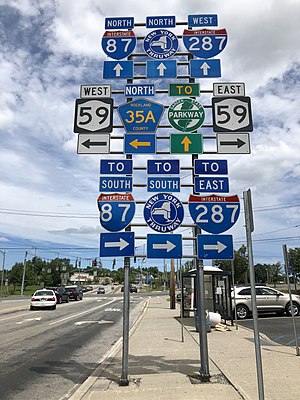 In the U.S., motorists navigate long distances using panoply of official but decentralized route marking schemes, or networks (network=*). Routes and their markers, or route shields, are designated by a variety of state and local transportation agencies and toll road operators. Route shields usually bear an unprefixed route number (ref=*) inscribed within a symbol. Unlike other kinds of road signs, route shields assume the motorist recognizes each symbol and is aware of the differences between each network. Networks often have conflicting numbering schemes, so it is important for software to identify routes using accurate symbols instead of making generalizations.

The most well-known shields belong to the following networks:

In addition, some states have multiple state route networks, county route networks in every county, or an extensive network of toll roads with special shields. If you encounter an unfamiliar shield in street-level imagery, consult the route shield field guide to determine the correct tags for the relevant ways and relation.

Traditionally, road atlases and online maps have relied on generic shields to simplify the user experience: for example, a state route always looks like

. However, these generalizations can be counterproductive depending on the use case. 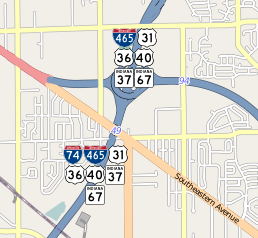 An Indianapolis route concurrency in the original osm-shields.

Route shield image assets have been made available for reuse in software projects:

The following renderers currently do not support route shields: