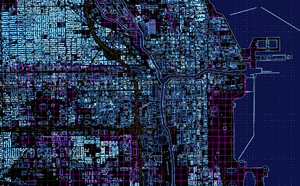 The "tronish" style. One of several map styles created using the Tangram WebGL system, which renders from the vector tiles.

Mapzen (mapzen.com) was an open source mapping lab building mapping tools and services, funded by Samsung. OpenStreetMap is central to many of its products. After it was shut down in 2018, The Linux Foundation announced, that it will become a Linux Foundation Project.[1]

Mapzen closed down end of January 2018. Most if not all of their products, services, and documentation were open source and remain available on GitHub. They have also provided a migration guide to similar services, and an organisation called Nextzen was established for some continued hosting.

CloudMade had previously used the Mapzen name for its editing products.