The tag amenity=pharmacy has been widely used for 14 years to map pharmacies (a shop where a pharmacist sells prescription medications), and it has already been approved for this purpose. This proposal seeks to clarify that amenity=pharmacy remains the approved tag to use, and therefore the newer duplicate healthcare=pharmacy should be deprecated.

Pharmacies are somewhat healthcare-related, but they are also shops. In many countries they sell a variety of items, in addition to prescription pharmaceuticals, and sometimes serve as convenience shops (e.g. in the USA). Therefore, they are not exactly shops, nor exactly like a healthcare facility. The original key amenity=* is a reasonable choice. This has been confirmed with extensive usage of amenity=pharmacy by mappers and database users: https://taghistory.raifer.tech/#***/amenity/pharmacy 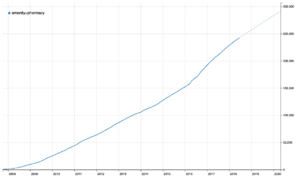 There is opposition to this potential deprecation of the widely used tag amenity=pharmacy[1]. There is some support but it is often motivated by a mistaken understanding that it was "part of the accepted proposal"[2][3].

Approving this proposal will re-affirm the previous approval of amenity=pharmacy. This will make it clear that healthcare=pharmacy is not needed and should be deprecated.

A pharmacy is "A shop where a pharmacist sells medications. Such shops also called drugstores, especially in the United States."

The related description at Item:Q4876 is "A shop or a dedicated counter within a shop, where a pharmacist sells and possibly prepares medications"

[This is the current definition used on amenity=pharmacy, and will not be changed by the proposal, it is included here for reference only].