The proposal is under discussion here : http://gis.19327.n8.nabble.com/Feature-Proposal-RFC-Hierarchies-route-bicycle-tt5930353.html

Bike routes are represented on OpenStreetMap as relations. There are many official routes that are already present in the base, and more will come. They can represent different types of itineraries: local, regional, national and even international.

That said, international routes are often based partly on national routes, which in turn are based on regional / local routes. Sometimes the regional ones are based on the locals. Clearly, with the system of flat relations, at least up to 4 itineraries can share the same physical path. In case of modification of this path (for example, a new 2-km cycleway along the road formerly used by the route), all the 4 relations have to be updated!

The concept of hierarchical relations makes it possible to avoid this edition nightmare, so that one single relation has to be modified, and this modification is automatically applied on the other 3 routes.

Paradoxically, this hierarchical process can complicate the management of bicycle routes when they are dense. Its use is therefore reserved mainly for itineraries covering long distances, several hundred kilometres.
It is still possible, and often even advised, to continue to create several parallel relations when routes meet over short distances, 10, 20 or even 30 km.

Look here for others explications.

The concept of hierarchies is mainly based on the system of parent / child relations. In fact, this system is already partially used, in particular to split the long national and international cycle routes, into chunks in order to avoid 1000+ member relations ... For example the EuroVelo6 contains a child relation for each country crossed.

The concept of hierarchies therefore only increases the possibilities offered by the system of parent-child relations. To do this effectively, you will need a powerful editor: JOSM.

We are going to take an existing case, where two national cycle routes intersect and partially share the same path, both operating on a regional route. The national routes are V50 and V52, and the regional route Boucle de la Moselle.

For clarity, we assume that the two cycle routes V50 and V52 do not share any other local or regional path to their respective destinations (Apach, Strasbourg, Lyon, Paris). In reality the V52 is also part of an international network ... but we omit this information to keep the case simple. 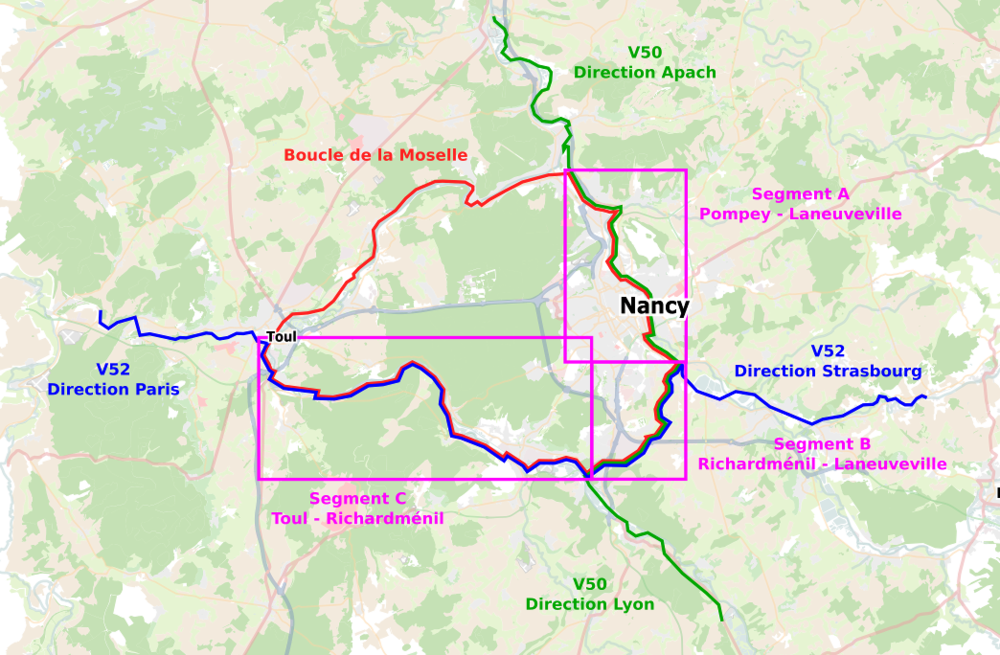 Thanks to the map, we see that:

Segment names are indicative, they don't have to be named in relations.

We start with the relation representing the cycle route of the lowest level, in our case it is the Boucle de la Moselle. We will tackle cycle routes 50 and 52 later.

The Boucle de la Moselle is therefore made up of 5 relations in total:

Each of them must use exclusively the tag network = rcn, the same ref = * and roundtrip = yes because it's a loop. No from = * and to = * because there is no point of departure or arrival (this differs depending on the case, some tourist loops have, example).

Now we are ready to make use of the hierarchies concept by integrating directly the children relations into the parent. The end user will see only the single parent relation (as if it was a flat relation) while the system will use the children to use the route properly.

The V50 consists of 5 relations:

Note: Véloroute is the name for French long-distance cycling route.

The principle is the same as for the V50, so it consists of 5 relations:

In the table below, the whole tree structure of the constituent relation is represented in the segment 1 of the Paneuropa-Radweg cycle route. It is about 1500 km long, segment 1 representing the French part is about 500 km long. It operates almost all along the Véloroute 52 Paris - Strasbourg, which uses multiple smaller routes. 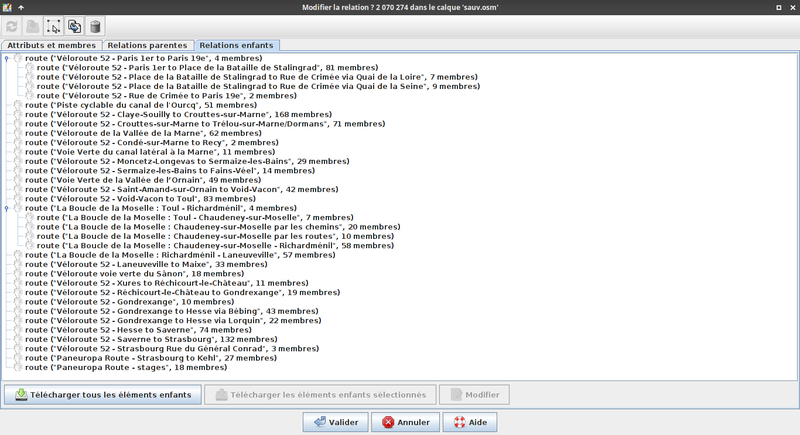 Some tourist cycle routes offer stopovers. In the concept of hierarchical relations, two itineraries along the same paths do not necessarily propose the same steps. The solution is to create a child relation listing each step. This relation uses the same tags as the usual cycling relation ( type=route , route=bicycle , network=* , ref=* , from=* and to=* ) but uses an explicit name ( name=Véloroute 50 : Étapes ). The members of this child relation are exclusively stages, nodes located on the route paths bearing the stage role.

This type of relation will eventually evolve over time as needs change. By adding, for example, information panels specific to the itinerary, or hostels in partner with the operator...

Tags from and to

It was previously written that the tags from = * and to = * are mandatory, this is not the case. However, their use is strongly recommended because they can be decisive for certain specific cases. Imagine that an agency created a 30-km cycleway, and decided to use it for two local routes. In this case, the solution is to create a child relation for one of the two routes, which will then be included in the second route. Since the two job routes network = lcn, then the tags from = * and to = * differentiate them.

Concerning the management of child relations considered as proposals due to the use of the tag state = proposed (usually planned routes and therefore not yet existing in the field), they can be included in the same way others not having this status. A system for rendering or reusing these data respecting the concept of hierarchies, will differentiate them, either by ignoring them, or by treating them in a different way. Thus, when this way will exist in the field, it will be sufficient to remove this tag.

Many itineraries offer variants of their routes: There are several alternative paths, starting from the same place and ending up on another same place. Currently there is no standardized methodology for tagging these variants, however a working group is currently studying the issue following the SOTMFR 2018.

These tags are used for testing purposes:

Indicate here a city or other possible appointment, which allows to differentiate it from other variants, do not hesitate to use official names if they exist.

Regarding the introduction of these routes into the concept of hierarchies, the practice is to create a separate relation for each of the available variants, referenced at the lowest level (recall: lcn <rcn <ncn <icn). These relations representing variants, generally two in number, are then to be integrated into the corresponding parent relation.