Relations of type multilinestring are used to represent one on the ground feature made of one or multiple line strings made of even more ways compatible and as define by the Open Geospatial Consortium. 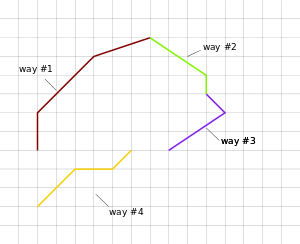 The intended use of multilinestrings is this:

If you want other roles for other ways having some "relation" to the first relation then No, use another relation type, this is the whole point of this relation type, beeing simple and compliant with the OGC standards.

However, another relation could be created that can include this one.

How not to use it

Do not use it to group loose ways Relations/Relations_are_not_Categories (like all path in a forest) Example : if the name is not the same for all those ways, then you'd better not use this relation

see also (and why I didn't join those)