Instrument designed for the observation of remote objects by the collection of electromagnetic radiation. 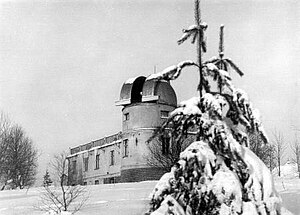 An observatory with an optical telescope

An observatory is a location used for observing terrestrial and/or celestial events. Astronomy, climatology/meteorology, geology, oceanography and volcanology are examples of disciplines for which observatories have been constructed. Historically, observatories were as simple as containing an astronomical sextant (for measuring the distance between stars) or Stonehenge (which has some alignments on astronomical phenomena).

A telescope is an instrument designed for the observation of remote objects by the collection of electromagnetic radiation. The first known practically functioning telescopes were invented in the Netherlands at the beginning of the 17th century. "Telescopes" can refer to a whole range of instruments operating in most regions of the electromagnetic spectrum.

Conflicts with man_made=telescope! Should be avoided, see Problematic tagging variants

Makes only really sense if there is no scope at all at the observatory site and one is unable to map the area.

Of course, if needed, even more exact tagging is always allowed: 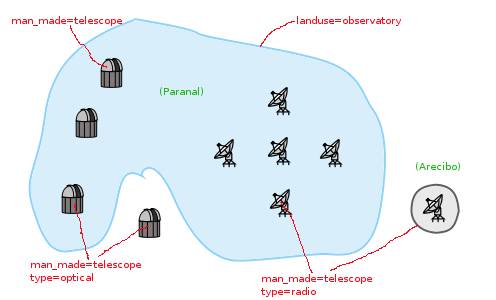 The area should not be blue, a gray like other landuses is better.

Discussion moved to the discussion page.

JOSM presets for observatories are available via the built-in function by downloading the preset file.