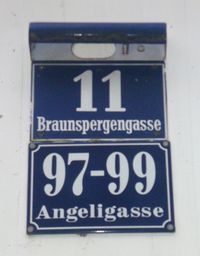 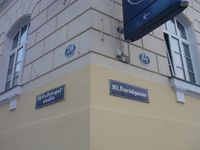 This tag is useful when something has more than one address. For example a house in a intersection might have a number signs facing each street, where both addresses are equally "official" (and both belong to the house as a whole).

An example from Tbilisi, Georgia, which I just made to illustrate the necessity of expanding address-tags: 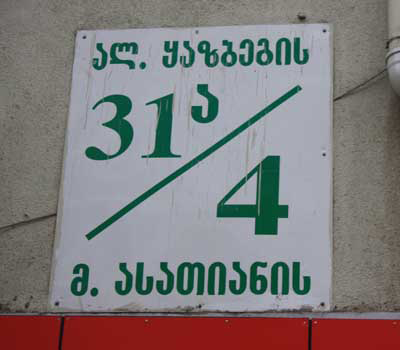 In the given examples, the adresses 4 Asatiani Str. and 31a Aleksandre Kazbegi Ave. are equally official and equally in use on the same building. --Moszkva ter 11:24, 20 January 2012 (UTC)

There are some alternatives:

These alternatives have some problems. For example, if a building is split in triangles, then "roof shape" tagging wont work. And if the addresses are placed on the nodes of the building outline it's easy to accidentally delete them. And it's also semantically incorrect, because the addresses belong to the entire building, not the individual nodes.

I think houses with more than 2 addresses are extremely uncommon.

Because the attributes in an address are related. A corner house can have two house numbers on different streets.

addr2 works just like addr, but they are independent from each other (unlike for instance addr:housenumber2). Here's an example:

This POI has two addresses: 11 Red street and 34 Blue road. Both are intended to be searchable. Note that the addresses are independent of each other. A feature with the tagging above should not show up if you search for 11 Blue road for example.

If the addresses have addr*:street specified, then the addresses/house numbers may be rendered closer to the respective street.

None. But tools that use the addr:* keys might want to use addr2:* keys as well. Especially search (otherwise addr2 won't be very useful). It's not so important to support addr2 in mapping tools, because it's easy to add a couple of extra attributes on the POIs that have two addresses.