Use the tag prominence=* to specify the Topographic prominence of a natural=peak in meters. Prominence is also known as "drop" or "relative height". Prominence measures the height of a summit relative to the lowest contour line encircling it but containing no higher summit within it. 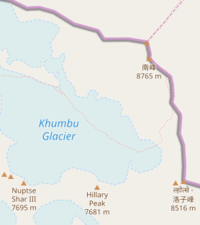 Topographic prominence is a objective measurement of how significant a peak is. For example, lists of tallest mountains use a minimum prominence cutoff of 100, 200 or 300 meters to define an independent peak. In general, all peaks with very high prominence (over 1500 meters) are important mountains. But not all important peaks have high prominence.

Prominence might be used to select peaks for rendering, or to select significant peaks for analysis by database users. A scheme which can work both for Denmark and Switzerland, would be: If too many peaks are present within a particular area of the map at a certain zoom level, select the ones with highest prominence. Different thresholds might be used for when to render a peak symbol only, versus render the peak with a name label or elevation. 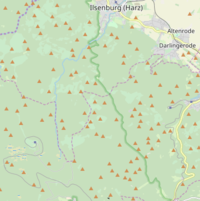 Another problem can be seen in the Harz mountains of Germany, where over 100 peaks can be seen at one time. A map renderer could choose to filter out the peaks under a certain elevation, but this would leave the map just as crowded in the center of the mountains, where all peaks are high elevation, and empty in the foothills, even though some of the lower peaks may be quite significant.

Filtering by prominence is a simple and objective way to solve rendering problems such as these.

The prominence of a peak is the same as its elevation if it is the highest point on a continent or island. All other peaks on the same landmass have a prominence that is lower than their elevation, found by subtracting the elevation of the lowest saddle (also called the "key col") along the ridge that connects to the next higher mountain.

Can also be determined with public domain topographic maps by checking the spot elevations listed for the peak or summit, and the elevation for the pass or saddle. This key saddle can be found by following the lowest contour line that fully encloses the peak, but does not enclose any higher summit.

Prominence values based off of accurate spot elevations from reliable topographic maps can be accurate to the nearest 5 to 10 meters. If no elevation is available for the key saddle, extrapolation from the nearest contour line may be accurate within 5 to 20 meters.

However many prominence values are more easily calculated algorithmically with a DEM (digital elevation model), see below.

See Key:ele for details about measuring and recording elevation data properly. For OpenStreetMap, this value should be in metres above above mean sea level as defined by the EGM96 geoid model. This elevation is usually very close to national "above sea level" systems with differences < 1 meter

It is possible to calculate the elevation of peaks and saddles, and therefore the prominence of peaks, with a digital elevation model (DEM), for example the public domain SRTM data. It has been suggested that this is an alternative to tagging prominence in the OSM database.

However, DEM elevations are usually only measured to the nearest 10 by 10 meter area. In areas of steep terrain, especially for peaks but also for saddles, spot elevations calculated from DEMs are often inaccurate by 10 to 20 meters. For example, the elevations recorded in the GNIS database for peaks in the United States are calculated from a DEM, and are usually 10 to 15 meters lower than the elevations recorded on paper topographic maps, based on professional surveys. The accuracy of DEM data can be affected by clouds and landcover. In some areas, holes and noise in the DEM data can lead to very inaccurate prominence calculations, if a gap or mistake in the data creates a false peak or saddle. This is commonly seen in mountainous areas in the tropics. 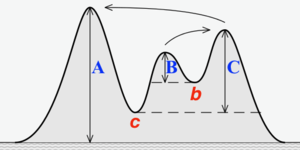 Ideally the key elevations should be determined from reliable sources, such as signs stating the elevation of the summit (peak) and pass (saddle), checked with public domain topographic maps, GPS and altimetry when feasible. It is also possible to calculate prominence values using public domain DEM (digital elevation model) databases, such as those based on SRTM, but these may be less accurate in some areas outside of North America, Japan and Europe.

See this article for more details: An introduction to Topographic Prominence

(Mauna Kea is the high point of the island of Hawaii, therefore it's prominence is equal to it's elevation. The spot elevation from the USGS is more accurate than elevations available from DEMs)

(The key saddle between Mauna Kea and Mauna Loa)

(The prominence of Mauna Loa is found by subtracting the elevation of the saddle named "Humu'ula", which is the low point of the ridge connecting Mauna Kea and Mauna Loa)

(This small peak has an elevation only a few meters below that of Mauna Kea, but it is merely a small peak on the side of the volcano, as shown by it's low prominence. It's unnammed key saddle is nearby at elevation ~4070m, according to public domain USGS topographic maps.)

Do not copy prominence data from Peaklist.org, Peakbagger.com, or Wikipedia, as these lists are not compatible with the OSM license.

Maps provided by the USGS, Canada and some European countries are available in the public domain.

Please list the prominence in meters, not in feet or other units. Whole-number, numeric values should be used only.

natural=peak It is proposed that this tag, prominence=* be included on the Wiki page for natural=peak as an additional tag

natural=saddle On the page for natural=saddle it will be mentioned that the elevation of a key saddle can be used to calculate the prominence of a peak.

Some peaks are tagged as natural=volcano as well, though this is also used for the center of a volcanic vent, not necessarily the high point or summit.

A Relation of type=peak may be used to relate a peak to its "key saddle". See the discussion page for an example. This may be a helpful for peaks where the key saddle is not nearby However, this relation is not a formal part of this proposal.

Please add comments, suggestions and criticisms to the talk page.

From the talk page:

This feature was originally proposed on 2009-09-28 by user hjelmis, though it was not brought to a vote.