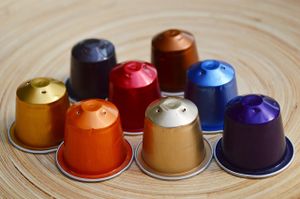 Due to the high popularity of Nespresso and other recyclable coffee capsules in Europe and elsewhere I suggest to include capsules in the "recycling" key.

Apps on smartphones could indicate if a recycling facility has a capsule bin or not. They are often hard to find nowadays.

Mostly Nespresso coffee shops take them back. There are hundreds of those shops across Europe. So additionally to shop=coffee I suggest to tag "recycling:coffee_capsules=yes/no".

It would be included in the "recycling" rendering.

And I thought that they are made from aluminium, i.e. recycling:aluminium=yes/no already covers these capsules. Also the photo illustrating this proposal doesn't show a specialized coffee powder capsule recycling station. Do those really exist? --zarl (talk) 17:29, 5 September 2015 (UTC)

Yes they do exist. Nespresso has to recycle them in a specific process. They open them and use the used coffe to make fertilizer. I think if you trow them into the regular aluminium you would also decrease the aluminium quality because of the high amount of coffee in it. And then there are places where they only take those capsules. In the palce I know it is just a container behind a building. They take only capsules no aluminium itself. --amilopowers (User talk:amilopowers) 19:50, 5 September 2015 (MESZ)

As Nespresso is brand rather than a type, maybe it should not appear in definition? Mateusz Konieczny (talk) 20:19, 5 September 2015 (UTC)

I just took it as an example. Of course I mean all the different brands. I proposed this because those capsules are huge problem to the environment and should at least be recycled. (User amilopowers) 06:50, 6 September 2015 (MESZ)

It was rejected with 2 votes for, 2 votes against and 1 abstention.

Not enough support (8 unanimous pro votes or at least 10 votes with more than 74% approval is the rule of thumb). No significant usage in the database either.