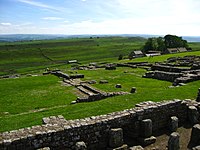 Ruins of a Roman fort

The goal of this proposal is to enhance the historic=ruins tag in order to provide more precise tagging about what type of ruins a ruin is.

The types of ruins vary hugely and are not at all captured by historic=ruins. More detail will be helpful for people interested in knowing what the ruin is e.g. castle, church, house.

The use of lifecycle prefix offers some more possibilities.

Keep the historic=ruins for any type of ruins that is of historical interest and increase details by using an additional, optional tag:

Both ruin_type=* or ruins=* could also be used as standalone without historic=ruins if the tagged object is of no historical interest.

This is a refreshed version of an original proposal from User:nop