This proposal consists of lane directions and turn restrictions, but much finer in detail and emphasizes ease of use and practicality.

At some point lanes will (hopefully) be mapped as individual ways or areas as proposed elsewhere, giving maximum detail of their physical location and allowing for very detailed turn information. This proposal is an extension of the current model of putting lane count information in tags; this is practical now and enables easy-going editing of information.

There is a certain asymmetry to the proposed relation — they only describe length or count of the lanes leading up to a junction, not leading away from it. As long as there is at least one outgoing lane on a given road, one might be allowed to turn onto it. This asymmetry is in keeping with the spirit of this proposal, ease of use and practicality — at this point there is no rationale for considering outgoing lanes.

While routers can use turn restrictions to figure out which turns are allowed and which aren't, they can just as well use the information provided by the proposed relation to help users find the right lane before junction.

The primary reason for designing the proposed relations is traffic simulation. Lane lengths and their allowed turns can have significant impact on the way traffic jams occur and develop and as such are required for detailed simulation. (Readers interested in traffic simulation can find more information at matsim.org.) 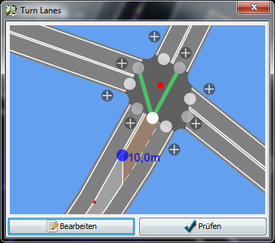 Screenshot of the turnlanes plugin GUI.

A JOSM plugin called "turnlanes" is available which enables straight forward editing of turn lanes and allowed turns. In order to edit a junction make sure all ways are split at the junction node(s). Upon selecting the junction node(s) and via-way(s)-to-be the graphical editor should be initialized. Clicking the "+" signs will add turn lanes, selecting them will allow you to adjust their length. Turns are allowed by clicking on an "incoming" connector of one lane and dragging the mouse to the "outgoing" connector of another road.

The following two videos demonstrate how to tag junctions with the turnlanes plugin.

When the graphical editor has the focus, the following hotkeys are available. 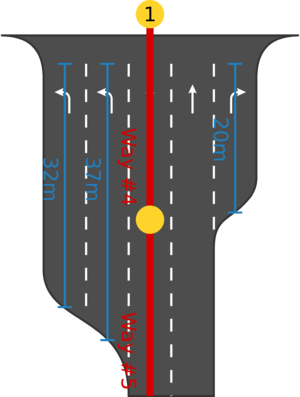 Example for two turn lanes on the left and one on the right side of the road.

This relation describes turn lanes for a given junction and road leading to it. While it is common for turn lanes on the right/left side of the road only to allow right and left turns respectively, this relation only concerns itself with the lanes and their length, not the allowed turns.

Given the example on the right we want to encode the information that there are two turn lanes on the left of the road with respective lengths of 37m and 32m as well as one on the right side of the road with a length of 20m. Also we need to model where their end which is node 1 and what path they take which is (starting at node 1) way 4 and then way 5.

The following relation is a simple translation of those requirements.

The argument has been made that geo information (here: lane lengths) should not be encoded in tags. To echo the introduction: This proposal tries to provide good detail while remaining practical and enabling straight-forward editing. The decision to encode lane lengths in tags directly rather than referring to a node on the road as its beginning was made to stay in keeping with those goals.

This relation describes the turn lanes from the example above.

In order to model allowed turns from a given lane, it is necessary to somehow refer to that lane. To do this we partition the lanes into two subsets, regular lanes and extra lanes (extra lanes being lanes specified by the relation of the previous section) and address as follows: 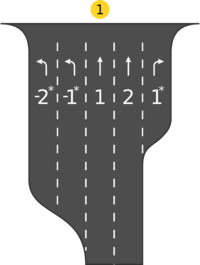 Given this schema describing allowed turns turns out to be rather trivial. 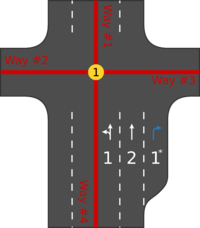 Example of a right turn from the turn lane on the right side of the road.

The following three relations describe the allowed turns as depicted on the right.

Dual carriageways are roads where the two directions of traffic are divided. Such being the case, they are modeled as two seperate ways in OpenStreetMap. This poses the problem that the junctions where dual carriageways intersect with other roads consist of two or more nodes. This in turn means that a turn from or onto a dual carriageway may begin at one node and end at another. In order to model what happens inbetween the via-role of turn relations is allowed to be one or more ways.

Sometimes, for instance when two dual carriageways meet, there are two or more ways to model the via ways for the same turn. By convention and if possible the via ways should be chosen such that performing the turn does not involve driving against the direction of the way.

When editing dual carrigeways and complex crossings using the JOSM plugin, select all crossing nodes and ways which form the crossing to be able to edit relations with graphical interface.