Qstarz International Co., Ltd. is based in Taipei, Taiwan and produces consumer GPS devices. The company also works as an OEM and ODM.

Regarding the GPS Week Number Rollover (WNRO) issue, the GPS date and time are calculated based on the number of week during the development of the GPS system, and the week number of the chip plan can only be calculated up to 1024 weeks, or about 19.7 years. After every 1024 weeks, this counter is "reset" to zero and the GPS time starts counting again. The first GPS week rollover occurred in August 1999. The second time will occur on April 6, 2019.

It's a bluetooth GPS logger based on the MTK chipset.

Bluetooth GPS logger based on the MTK II chipset. gpsbabel and mtkbabel work out-of-the-box with this device.

Version of the BT-Q1000x with double the memory and vibration sensor.

This is also referred as Super 99 Bluetooth GPS Travel Recorder. The small solar panel on the front of the device helps to preserve the battery. 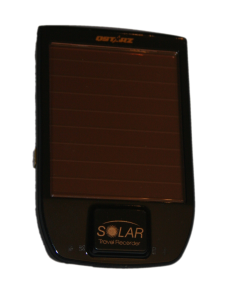