This router uses a routing algorithm that takes OSM format data as its input and calculates either the shortest or quickest route between two points. To optimise the routing a custom file format is used that contains the defined highways broken into segments and joined in groups of segments with the same properties. This allows the routing to be performed quickly after a modest one-off pre-processing stage.

A selection is possible for any of the major OSM transport types and for each of the main OSM highway types a preference can be provided and a speed limit. Restrictions on one-way streets, weight, height, width and length are also options. Further preferences about road properties (e.g. paved or not) can also be selected.

The processing of the input XML, PBF or O5M file is based on rules in a configuration file that transform the highway tags into tags that are understood by Routino. The generation of the output files (HTML and GPX) uses language fragments selected from another configuration file which allows multi-lingual output from the same database.

The router takes into account private/public/permissive restrictions on highways as well as tagged speed limits and barriers (gates, bollards). The simplest and most common turn restriction relations (those composed of a way, node and way) are supported.

Since version 3.0 the routing function is available as a shared library (for Windows or UNIX-like systems) so that routes can be calculated from other programs. A routing database generated using the command line tools is still required (the library does not include creating the database).

The OSM data is processed and intially split into nodes, segments (portions of ways that connect pairs of nodes), ways (that store the properties for the segments) and relations (for routes and turn restrictions). A pre-processing step is performed to identify interesting nodes (called super-nodes) and add to this segments a set of super-segments that connect a pair of super-nodes such that the optimum route between them is along a set of segments with identical routing properties.

Routino can handle turn restrictions that are composed of a single node for the via point and a highway for each of the from and to components.

The second complexity of including turn restrictions is that U-turns within a highway must be forbidden. If this was not the case then it would be possible to bypass a "no left turn" restriction by driving past the restriction and performing a U-turn to come back and turn right. In Routino this restriction on U-turns is taken as default so that when calculating a route with three waypoints for example the route will continue from the middle waypoint in the same direction as it arrived (for those forms of transport that obey turn restrictions). The only time that a U-turn is allowed is when starting from a waypoint and facing a dead-end highway (otherwise the route could not be calculated at all).

In terms of the Routino data model of super-nodes and super-segments for calculating routes quickly there are some extra complications such that super-segments cannot end at a turn restriction node and a dead-end road with a loop cannot be optimised away.

During the pre-processing step a number of simplifications or improvements of the raw data can be made. The intention of these is to reduce the database size (to speed up routing) and to reduce the number of routes that cannot be calculated. These data pruning options are enabled by default although they can be disabled on the command line or their behaviour tuned.

The types of data pruning and their purpose are described below:

Many routing preferences are available, as of version 2.3 the following can be selected when calculating a route:

In addition the route selected can be the fastest or shortest (taking into account the specified preferences of the other highway properties).

A route can be made up of up to 99 waypoints (a smaller limit can be applied to the online router) with an optional starting direction specified.

The Routino software as supplied contains an implementation of a router web page using a Slippy Map that allows markers to be placed or locations to be searched (calling Nominatim from a server CGI) before calculating a route.

The routing preferences default to the a pre-determined set depending on the transport type selected. These can then be edited before the route is calculated. Selecting one of the "Shortest" or "Quickest" buttons will calculate the route and display the results. The route is displayed on the map and by moving the mouse over the route description each important junction can be highlighted on the map with a description of it. 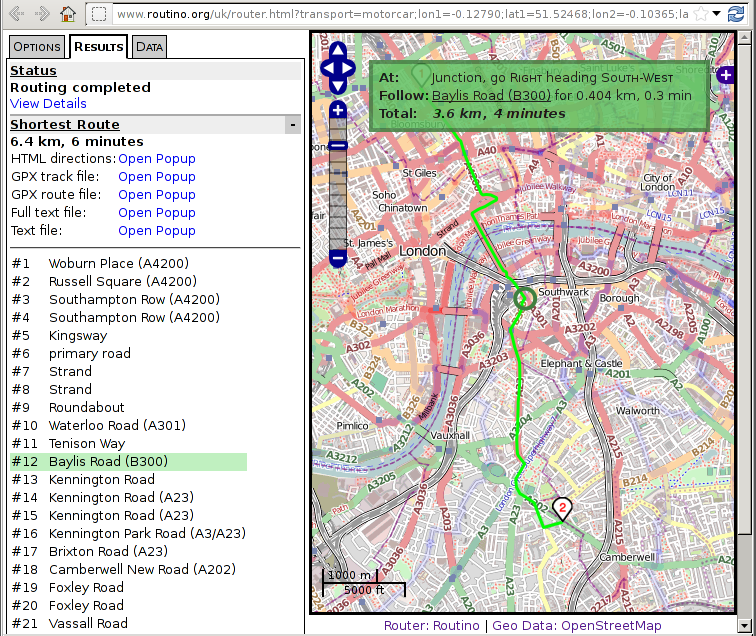 The web interface that allows routes to be calculated also provides a way of visualising the data that is used for calculating the route. A second web page is available (linked to the router page by the "Data" tab) that can be used to display various information about the contents of the Routino routing database. 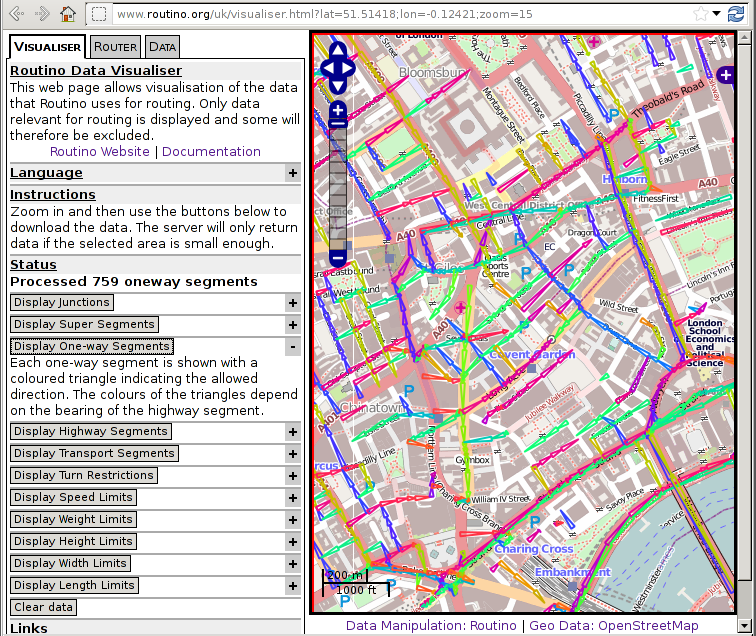 When Routino fails to find a route this information can be used to check whether the expected route is available for the selected routing preferences.

When creating the routing database Routino can create a log file of errors that it has found in the data (using the --errorlog option). The majority of the problems that are reported are restricted to tags that a router should be expected to understand, to highways or to relations.

The types of errors detected are:

Since the purpose of the Routino error log is to find data that causes problems for Routino it does not mean that all reported items are data errors. Some of them however will be data errors that will affect multiple data users.

An online demonstration of the router for the UK (actually Great Britain, Ireland and Isle of Man as defined by the OpenStreetMap data dumps at GeoFabrik[1]) is available:

Online demonstration of the router for Belarus is available:

(No information on update frequency given; age of data files is visible under "Data" -> "Display data statistics" on all routino websites)

The software is released under the Affero GPLv3 license and source code can be downloaded from here:

This router was originally announced on the talk-gb list[2] as an online router using OSM data. Later discussion[3] clarified that the software running the online webpage would be released as free software.

Adds turn restriction processing and stops U-turns at waypoints unless required to get out of a dead-end.

Various bug fixes, some important ones that affect large data sets. Updated to latest version of OpenLayers. Includes Python bindings for routing and access to database.