Join us and help make the best free and open map of one of the capital’s heritage zones!

What is a Mapping Party?

Mapping Parties are events where anyone can come and participate in the OpenStreetMap project. OpenStreetMap is a free and open source map that can be contributed, edited and used by anyone anywhere. Mapping Parties are social events where experienced and new mappers can meet to share and learn more about the project. The events are generally held in a public place, and allow time for discussions, mapping and editing.

The Mapping Party will happen the whole day of September 13, 2014, Saturday, and will consist of three parts: a morning meet-up, the actual field surveying, and the afternoon meet-up and editing session.

† To find the meeting room, ask around for the Wikipedia event.

What will we map?

The main goal of this Mapping Party is to put on the map most of the the heritage sites in Santa Ana, which is a heritage zone[1][2]. The secondary goal is to add missing and confirm details on the map such as street names, one-way directions, and points of interests (POIs) such as schools, churches, restaurants, banks, convenience stores, and the like.

Cake slicing is a phrase used in OpenStreetMap Mapping Parties where the area to be mapped (the cake) gets divided into smaller areas (the slices) such that each slice can be surveyed and mapped by around one to three people. It's basically your simple divide-and-conquer approach to mapping! The assignment of which cake slices will be surveyed by which people will be done during the morning briefing.

Explore the area on OpenStreetMapǃ 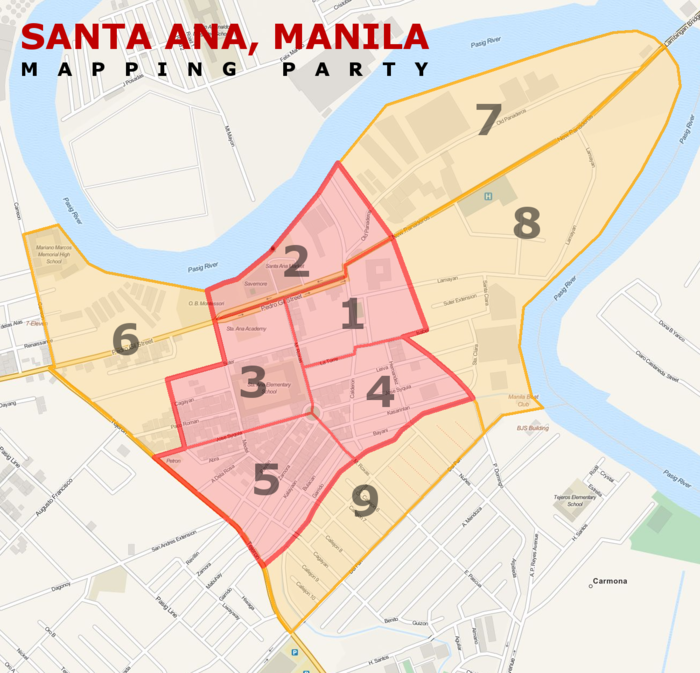