Shantou Rail Transit (汕头轨道交通, STRT) is the municipal passenger traffic railway system connecting the inner city and suburbs of Shantou City. It is still under construction. The first STRT line is expected to open in 2020.

STRT lines and stations should be tagged once they are visible on aerial images.

Shantou City is divided into northern and southern parts by the Rongjiang River (榕江) and Shantou Harbour (汕头港). There exists two ferry lines between Shantou urban area and Haojiang District and one ferry line between Chenghai District and Nan'ao County. The latter becomes less important after the opening of Nan'ao Bridge.

Waisha Airpoirt is located in Longhu District, north-west of Shantou City. It was formerly the main civil airport serving the Shantou since 1974 until nearby Jieyang Chaoshan International Airport was opened on 15 December 2011. Shantou Waisha Airport became a military airbase since then and all civilian flights were transferred to the newly built airport in Jieyang.

This section aims at regrouping expressways and national highways which pass through Shantou City. 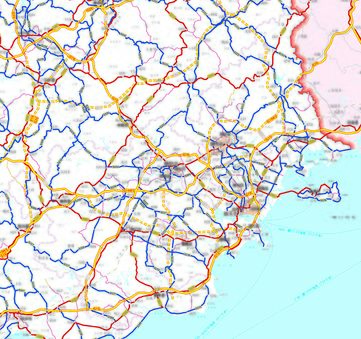