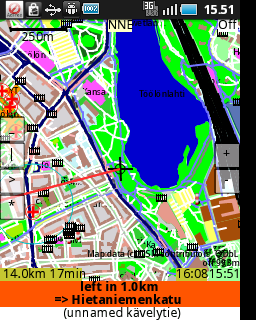 Features planned for the future are online functions and making the UI better for Android and more support for public transport.

ShareNav is free software licensed under the GPL, version 2.

ShareNav provides vector based rendering of OSM data. OSM data is pre-compiled into an efficient binary representation with information for routing as well as map drawing. ShareNav can be run on a mobile equipment with Android or J2ME. ShareNav can also be used on a laptop or desktop computer with a Java runtime environment, though it probabl will have some loss of functionality & comfort of using, compared to mobile versions. Basic functions like map viewing and searches do work also on the laptop/desktop. Also acquiring and showing a GPS position will work if gpsd is running on the computer.

ShareNav works on Android and laptop/desktop Java runtime, and a large set of smart and feature phones as well as some other devices supporting Android or mobile java (J2ME). For J2ME, the support is largely like on GpsMid, details omitted for brevity, look at the GpsMid entry for that.

For Android, ShareNav can be installed from Google Play Store, formerly known as the Android Market. For the laptop & desktop, an Osm2ShareNav program to build map & app bundles can be downloaded from the ShareNav SourceForge Files section. See the ShareNav wiki page on Osm2ShareNav for instructions on how to build the app+map bundle for J2ME or laptop/desktop.

Information about development can be found via the ShareNav wiki. The public repository for ShareNav is at GitHub.

ShareNav project has a java application, Osm2ShareNav, to be run on a laptop or desktop computer which can be used to create the vector-based offline maps (with routing data) for ShareNav. Osm2ShareNav is available at https://sourceforge.net/projects/sharenav/files/. Maps created for GpsMid will also work.

As an offline map application, ShareNav needs to store the data on the device. ShareNav uses its own binary data format to be as efficiently as possible in size requirements, as well as optimise for routing. Therefore, the raw data from OpenStreetMap has to be converted and bundled into a map data bundle. This is done by using the Osm2ShareNav converter that runs on your PC (not your phone)

As many (older) java phones are / were not very good at dealing with external files, the default method is to bundle the data into the application .jar or .apk file. But also external maps are supported, and are probably easier to use for modern platforms and devices like Android.

For easy use (don't need to do the bundling step yourself), there are some pre-bundled maps available for download for GpsMid that can directly be uploaded to your phone. They can be used for ShareNav too, see GpsMid for details.

To create ShareNav build with map data for your own regions, you first have to download the raw data from OpenStreetMap (typically *.pbf.bz2, *.osm.bz2 or *.osm). Then in the conversion using Osm2ShareNav (or Osm2GpsMid from the GpsMid project), a subset of the downloaded data (defined by up to 9 rectangular regions) will be included in the generated bundle.

Osm2ShareNav provides a graphical user interface (GUI) to selecting many of the configuration options for the map building & bundling process. For more advanced options (for which there's no GUI functionality), there is also the option to configure the conversion process through a text file (.properties file).

Map bundles (J2ME and J2SE, also known as Java ME and Java SE)

It's also possible to create a map bundle, which in ShareNav terminology means a bundle of a map and a ShareNav program to be run on the devices. This can be useful especially for J2ME devices with limited access to external maps. It's also useful for producing a map + app bundle to run on a desktop or laptop computer.

One of the parameters to set is the "Phone capabilities". Although J2ME was designed to write once run everywhere, not all implementations of Java on phones is fully compatible with each other. Therefore ShareNav provides a couple of different options to increase you chance of it working. You can also influence how and if ShareNav will use online services with the selection of "Phone capabilities".

For J2ME, in nearly all cases, Generic-full-connected or Generic-full should be used, as they provide the most comprehensive set of features. For Java SE (desktop or laptop target), choose target Generic-java-full-connected.

Information on the properties file syntax is in ShareNav wiki Properties page.

ShareNav is not a full OSM editor, but allows for some data maintenance in the field.

Currently, ShareNav allows you to select a way or POI in the map and edit or add tags of that way or POI and directly upload the changes to the main OpenStreetMap database. This can be useful for example to quickly add a missing name, a speed restriction, set it to oneway or add some of the other meta data that is often still missing from ways. POIs can also be added.

ShareNav also supports opening the area shown on the map for editing via a web browser with Potlatch.

It is possible to use ShareNav for Audio Mapping as it allows the user to record sound clips, and creates a GPX waypoint associated with each clip. The audio clips and GPX file can then be processed for use in JOSM for mapping.

This process leaves you with a lot of audio clips in your phones memory, and the GPX waypoints hidden in ShareNav's own storage area. To get these in to JOSM on your PC, do the following:

File extensions that could be used in this article and are useful with ShareNav (creating map, recording data).