From OpenStreetMap Wiki
< State Of The Map U.S. 2010‎ | BIDS
Jump to navigation Jump to search 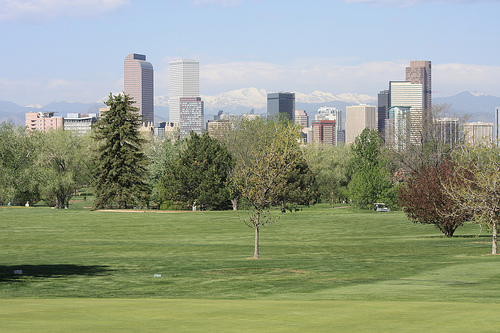 Denver, the Mile High City (the state capitol steps are officially at 5280 feet above sea level), is a big city that feels small. It is 380 miles West of the middle of the USA (out here, 380 miles isn't really all that far). Denver is officially the most awesomest city in the world. There are a number of fundamental reasons Denver excels as a SOTM US bid: from its friendly inhabitants, excellent transport, and copious local beer. Heck, even Coors is a local brew!

Denver is the largest city and the capital of the State of Colorado. It lies at the heart of the population-dense Colorado Front Range Urban Corridor, the area extending South to North along the Eastern edge of the Rocky Mountain range from Pueblo, Colorado to Cheyenne, Wyoming.

Sizes and distances are distorted in the Southwestern US. The total population of the entire state of Colorado is less than either the Metro areas of Washington, D.C. or Atlanta, Georgia. In fact, you'd have to lump the entire population of Wyoming in to even come close! But this population isn't squeezed into a dinky Eastern-seaboard-sized state. Colorado is twice the area of Georgia. In fact, the state of Colorado is so big that if you overlaid the southwest corner on Atlanta, Georgia, the northeast corner would just about be in Washington, D.C.

The Front Range Urban Corridor is considered "densely populated" for these parts with over 4.25 million people out the combined population of 5.5 million people in Colorado and Wyoming. These two states comprise over 200,000 square miles, or approximately four times the area of the state of Georgia. This intense combination of high and low population densities highlights the disparities in consistency of contributions in OpenStreetMap.

It takes over eight hours to drive from the southwestern corner of Colorado or the northwestern portions of Wyoming to the closest major airport in Denver. In order for map contributors from these rural areas to participate in SotM hosted elsewhere, the drive to Denver would take longer than the rest of the trip! A Denver SotM would encourage more participants from rural Southwest communities than an East Coast SotM.

The team of organizers for this event include people who have been organizing mapping parties for years as well as running similar-sized events. Their connections with local, national and international organizations greatly facilitate sponsor development.

Denver enjoys about 300 days of sunshine per year. If you look at charts of monthly sunshine hours, you'll see that the darkest month in Denver is brighter than the brightest in DC! (knod to Jennifer Daniel's song Ohio). But that doesn't mean it gets hot: the average daily high temperature in June is 82 degrees. And just what is this humidity thing people in the East complain about? It's so dry in Denver, it's hard to actually break a sweat when you work out!

WhereCamp5280 was held August 14th & 15th at the University of Denver. The event attracted almost 100 participants including several from outside Colorado. The event was fully funded through sponsorship. Sponsors included ESRI, Bohanan Huston, dtsagile, PublicEarth, Enspiria Solutions, UMapper, AnyGeo, CAD-1, Spatial Networking and others. Attendance was free, and the event was held at the University of Denver in space sponsored by the Geographic Technology Applications Center. OSM was highly showcased, including a keynote by Steve Coast and a mapping party. The WhereCamp5280 organizers, Eric Wolf, Peter Batty and Ben Tuttle, would all be involved in organizing SOTM Denver 2010.

Many large geospatial companies have big offices in the Denver area:

Based on prior successful experiences, possible venues for SoTM in Denver are:

All venue options can provide ample space, WiFi, and projectors at a minimal expense. The University campuses do create specific time considerations as the event would have to be held between terms. These match the proposed Summer time frame for SoTM:

Almost as importantly, there is a wide choice of good social venues for the all-important extracurricular aspects of the conference. Several members of the team have extensive experience in organizing outstanding social events in breweries :) !!

Based on prior experiences with the event venues and catering, a two-day SoTM event with up to 200 attendees in Denver could be held for less than $7,000 total. Our experience with attracting sponsors for prior events make us confident that at least 50% and as much as 100% of that cost could be covered. At a 50% sponsorship rate, the cost to attendees would be $17.50/each.

This cost includes all facilities, lunch and refreshments, and an evening social event.

Note to other organizers: I simply doubled the cost and number of participants from WhereCamp5280 in 2009 but based the attendee cost on the same level of sponsorship. I believe this is very conservative, both in the total cost and the amount of sponsorship.