State of the Map 2017/Call for venues/Milan

Welcome to the bid proposal page to host State of the Map 2017 in Milan, Italy.

Wikimedia Italia is an Italian association of volunteers promoting open culture projects on a national scale since 2005. The organization is the official Italian chapter of Wikimedia Foundation inc., the US Foundation known around the world for Wikipedia, the free on line encyclopedia.

Last January 2016, Wikimedia Italia has been officially recognized as the Italian chapter of the OpenStreetMap Foundation. We are very proud of this outcome achieved thanks to our Vice - President Simone Cortesi, OpenStreetMap volunteer since the beginning, and former director of the OpenStreetMap Foundation. The Italian OpenStreetMap community has been talking for years about the creation of a chapter. Most people felt that it was important, but also that founding yet another association was pointless. Associations are not built only on projects, but also, and mainly, on common values and on a common vision: Wikimedia and OpenStreetMap share both, and it's just natural to work together.

During the last ten years of activity Wikimedia Italia has built a strong expertise in the organization of national and international events.

On a national scale, Wikimedia Italia organizes conferences, meetings, editathons (a special type of meetup to improve the encyclopedia. It is usually held in libraries, museums or other cultural institutions, focused on a specific encyclopedic topic, and is a great way to attract new Wikipedians) and, from 2014, mapping parties together with OSM community, which have had a great participation also of beginners!

As regards the international events, Wikimedia Italia organized the Wikimedia Conference in 2013, annual meeting of all Wikimedia chapters to discuss their status and the future of the Wikimedia movement in terms of organisational development. carries on many projects with cultural italian institutions such as libraries, museums, schools and universities.

Wikimedia Italy is also promoting, together with other partners, Wikimania 2016, the annual conference of the Wikimedia movement, organizing meetings and events and collaborating to the communication. During the event (June, 21st to June, 26th) there will be talks, discussions, meetups, training and hackatons on Wikipedia and its sister projects, held together by the conference's motto: "Wikipedia as a driver of change". After venues like Hong Kong, London or Mexico City, Esino Lario, a small Italian village in the Province of Lecco (Lombardy Region) will host the conference. What is peculiar in the current edition is that, for the first time, it will not take place in a huge conference hall, hotel, university but in a small village in the Alps: Wikimania 2016's venue is the entire village! About 1,000 of volunteer editors will come together to learn about and discuss projects, approaches and issues.

We are now definitely ready to host State of the Map in Italy!

"Imagine a world in which every single human being can freely share in the sum of all knowledge. That's our commitment."

State of the Map 2017 - Milan will be an event where we celebrate free knowledge and the geographical wonder that the OSM communities represent.

We plan on bringing together a diverse group of people and involve both the private and public sector.

The event will bee an opportunity for visitors to experience the local cultural heritage as well as a good place to plan a short vacation.

Milan is the second largest city of Italy and the economic capital of the country. It is also well known in the world for the fashion, the design and the culture. The city is definitely the beating heart of Italy, a city of art and culture, an easy-to-reach place and, starting from April, 14th, the new "home" of Wikimedia Italia.

Ancient buildings, monuments, design masterpieces and artworks from different historical periods live together in Milan. Leonardo da Vinci's masterpiece "The Last Supper" is located in the church of Santa Maria delle Grazie in the very center of the city. Walking down the street of Milan you can find the past and the future mixed together: you may encounter Duomo di Milano , the main Milan Cathedral but also the Bosco Verticale, which has been awarded as the “2015 Best Tall Building Worldwide”, far just 2,4 kms from Duomo.

Besides, in 2015, Milan hosted the Expo: to prepare to this international event, means of transport, the tourist industry and all types of accomodation have beed renewed. In few words, Milan is ready to host an international event such as "State of the map", now more than ever.

Who is the Team?

Our team members are:

The best season for State of the Map in Italy would be end of May - end of June: the weather is fine and not too hot. In addition, if someone you want to extend your stay in Italy and consider an italian vacation he or she still find several off-peak fares. Places for vacation such as the Alps, the Ligurian Riviera and many beautiful Italian cities (Venice, Florence, Bologna and so forth) are easily reachable. 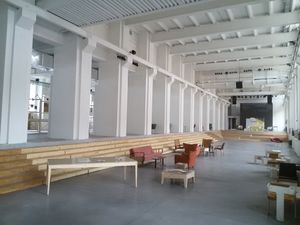 BaSe Milano is a former industrial building, purchased by the Municipality of Milan with the aim of promoting and spreading cultural initiatives. The building has been just renewed and hosts coworking space with some resident firms (from next week Wikimedia Italia premises!). There are some space is available for temporary tenants and 3 huge rooms for events and conferences. The complex also hosts the laboratories of the La Scala Theatre and the Museum of Cultures designed by architect David Chipperfield. BaSe is 700m far from the the railway station Milano Porta Genova and the metro M2 (connected directly to the main railway station Milano Centrale).

A separate document has been prepared with info about the venue and catering. 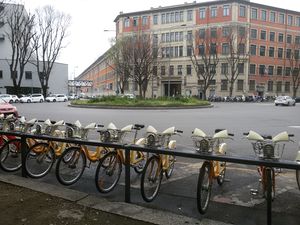 Going to/from/in Milan is easy: you can count on a capillary underground system, the surface public transportation (tram and buses) and several train stations linking downtown and the neighborhood. Tickets are pretty cheap and it is also possible to rent a bike across the city (one big bicycle parking is just in front of the main entrance of BaSe, Wikimedia Italy's premise and selected venue). There also many car sharing options.

Located in Northern Italy, Milan is served by three airports, all well connected to the city center.

More information for attendees and their travelling companions.