State of the Map 2018/Call for venues/Heidelberg

Welcome to the bid proposal page for hosting the State of the Map conference 2018 in Heidelberg, Germany. 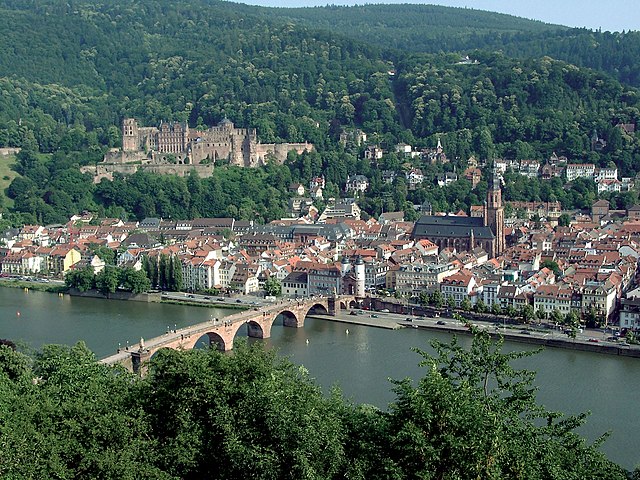 Heidelberg is a beautiful university town in south-west Germany with a population of around 160,000. It is a popular tourist destination drawing in crowds from all over the globe thanks (in part) to its historic old town and large castle. Founded in 1386, Heidelberg University is Germany's oldest and sits among the most renowned research institues in Europe. Nestled at the mouth of the Neckar Valley, not only does Heidelberg boast some exquisite historical architecture, it also offers impressive hiking trails for those wanting a bit of natural scenery.

OpenStreetMap plays a crucial role in the research of the GIScience group at Heidelberg University. In addition to state of the art research about topics like quality indicators for VGI data (such as OSM), the institute has also produced a number of useful services for the OSM community over the years, for example OpenRouteService or the data analysis platforms OSMatrix and osmlanduse.org. Another focus is on the usage of OSM in humanitarian and disaster contexts, where the local "disastermappers" organize frequent mapathons.

Being located in the centre of Europe and having a community of very active local mappers, Heidelberg is representative of a region where OpenStreetMap is already a competitive alternative to other mainstream commercial map services, in some cases even being superior. This manifests itself in OSM being already publicly used by many local organisations ranging from small companies up to the regional transport authority.

Who are the local team?

The local team consists mostly of members of the HeiGIT project (which is part of the GIScience group of the university's geography department). Most of us are also active members of the OpenStreetMap community.

Our team members are

We propose to hold the conference in early to mid September 2018, for example Friday to Sunday 7th to 9th, or 14th to 16th.

Subsequent to or preceding the chosen date for the State of the Map 2018, we do also offer to host the HOT Summit in Heidelberg.

Heidelberg University offers a few possibilities to host conferences. We're currently looking into different options, which are listed below:

Located in the main university campus, the lecture halls of the chemistry department are quite spacious and are ideal for the conference tracks. Additional rooms for workshops are available in the nearby buildings, for example in the "Mathematikon" building.

The Campus "Neuenheimer Feld" is located on the outskirts of Heidelberg centre, and is easily reachable from the whole city via public transport (two tram lines and two bus lines direcly connect it to the rest of the city). Or if you don't mind some physical activity, it is also reachable by foot (e.g. 20 minutes from the main train station) or bike (e.g. 15 minutes to the old town).

On the same campus there is a second option with more lecture halls in the "Theoretikum" buildings.

Heidelberg is located in the south-west of Germany, approximately 80km south of Frankfurt. Due to its central location, it is easily accessible from all over Europe and also internationally via Frankfurt and Stuttgart airports.

Frankfurt Airport is Germany's busiest airport and offers many worldwide connections. From the airport, Heidelberg is reachable via train in less than an hour.

In addition to that, there are some smaller airports nearby, which provide low-cost connections (mostly to destinations in Europe), for example:

Heidelberg can be reached by train most easily via Mannheim main station. It's only a 15 minute train ride from Heidelberg and from there you have direct long distance trains (ICE, TGV, IC, EC) to all over Germany and its neighbours France, the Netherlands, Switzerland and Austria. There exist also a few long distance (IC, EC) connections direct from Heidelberg Main station.

You can find train connections to Heidelberg on the website of Deutsche Bahn.

Other methods to arrive in Heidelberg may be driving or taking a long distance bus.

Depending on your country of origin, you may need a Schengen visa. On the following link you can find more information about travelling to Germany: http://www.germany.info/visa

The university campus (and also many locations in the city) offer free wifi hotspots via the initiative “Heidelberg4you” from the city of Heidelberg (registration with mobile phone number is required).