State of the Map 2018/Call for venues/Milan

Welcome to the bid proposal page to host State of the Map 2018 in Milan, Italy

Wikimedia Italia is an association of volunteers promoting open culture projects on a national scale since 2005. The organization is the official Italian chapter of Wikimedia Foundation inc., the US Foundation known around the world for Wikipedia, the free online encyclopedia.

This result gained an enthusiastic reception by the italian OpenStreetMap community, that was already talking about the creation of a national chapter. Wikimedia Italia and OpenStreetMap have a common mission and vision and are heading in the same direction: working together has been simple and natural from the beginning.

During the last ten years of activity Wikimedia Italia built a strong expertise in the organization of national and international events.

On a national scale, Wikimedia Italia organizes conferences, meetings, editathons[1] and - from 2014 - mapping parties together with OSM global community, that have registered a great participation, also from beginners.

With regards to the international events, Wikimedia Italia in 2013 organized the Wikimedia Conference, the annual meeting of all the Wikimedia chapters to discuss the state-of-the-play and the future of the Wikimedia movement in terms of organizational development. Wikimedia Italia also supported the promotion of Wikimania 2016, the annual conference of the Wikimedia movement. About 1,000 volunteers attended the event to discuss about Wikimedia projects and learn new approaches. Thanks to our dedicated Project Manager we reached about 1300 students and 200 teachers from schools in Lombardy region with activities related to Wikipedia and other Wikimedia projects; some of them were also involved as volunteers in Wikimania Esino Lario. Furthermore, we organized Wikimedia courses in several universities in the Milan and Lecco area.

In the last two years Wikimedia Italia also organized OSMit (the italian State of the Map). In 2016 OSMit was held in Milan at BASE, Wikimedia Italia headquarter, and involved many representative of the public administration and OSM community. This year Wikimedia Italia co-organized FOSS4G-IT 2017 in Genoa. The event for the first time included both OSMit and GFOSS-day. More than 350 participants attended the event, organized in collaboration with the University of Genoa. 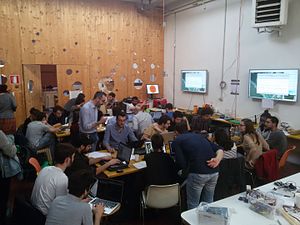 Politecnico is also very active in the research field and supporting OpenStreetMap and the related projects, as Youth mappers. Polimi is also one GeoForAll laboratory ("Geo for All" is the Open Source Geospatial Foundation's Committee for Educational outreach). The University runs hundreds of events a year (e.g. 29 events only in May 2017 https://www.eventi.polimi.it/?lang=en) and it also organized FOSS4G Europe 2015 (https://europe.foss4g.org/2015/) in Como. Wikimedia Italia and Politecnico di Milano have already worked together in several occasions, both education activites, research, mapathons and public events. A recent example is "Mapping for cultural heritage": a mapping and editing party promoted on March 30, 2017 by Wikimedia Italia, Maptime Milan, Polimappers and GisTonic Milano. The event was attended by more than 30 participants.

We are now definitely ready to host State of the Map in Italy!

"Imagine a world in which every single human being can freely share in the sum of all knowledge. That's our commitment". This is the vision of the Wikimedia movement and we think it has a lot in common with OpenStreetMap and the philosophy behind it.

Thanks to our experience in connecting the "wiki universe" to OpenStreetMap, we would like State of the Map 2018 - Milan to be the first international collaboration between the Wikimedia movement experts and the OSM community. The participants will start to explore the possible interactions between the projects both in theory and in practice, through specific workshop sessions.

In the last few years we already laid the groundwork for this, working both with the wiki and OSM community in Italy: an example is the OSM geolocalization of the Paolo Monti archive on Wikimedia Commons.

State of the Map would be an occasion for the communities to join together and express their full potential in promoting open and free culture. We are planning to bring together a diverse group of people, involving OSMers, Wikipedian, Wikimedians together with the private and public sector and the academy.

The event will also be an opportunity for visitors to discover the local cultural heritage...and maybe to plan a vacation in Italy!

Milan is the second largest city of Italy and the economic capital of the country. It is also well known in the world for fashion, finance, design and culture. The city is definitely the beating heart of Italy, a reference point for arts, culture and fashion but also for technology and innovation, an easy-to-reach place and - starting from April 2016 - the new "home" of Wikimedia Italia.

Ancient buildings, monuments, modern design and artworks from different historical periods can be found in Milan. Walking down the streets you can find the past and the future mixed together: you may encounter Duomo di Milano, the main Milan Cathedral but also Bosco Verticale, which has been awarded as the “2015 Best Tall Building Worldwide”. Leonardo da Vinci's masterpiece "The Last Supper" is located in the church of Santa Maria delle Grazie in the very center of the city, not far from the new Piazza Gae Aulenti designed by the argentine architect Cesar Pelli.

In 2015, Milan hosted the Expo: in order to prepare to this international event, the transportation system and all the tourist facilities such as hotels, infopoint, etc. have been all renewed and expanded.

Milan is definitely the perfect location to host an international event such as "State of the Map".

Who is the Team?

Our team members are:
Wikimedia Italia

A few more members of Wikimedia Italia team and Politecnico di Milano will also be involved.

A good season for State of the Map in Italy would be mid June - mid September: the weather in Milan is fine and there are plenty of events in the city. In addition, if some of the participants are interested in extending their stay in Italy, they can consider a vacation in our beautiful country: places such as the Alps - the Dolomites for example are well known and appreciated all over the world - , the Ligurian Riviera and many beautiful Italian cities (Venice, Florence, Bologna and so forth) are easily reachable by train or by plane.

Politecnico di Milano (POLIMI) is located near the city centre

http://osm.org/go/0CjGVAUA--?m= , just 3 stops away from Central Station and 5 from Milano Porta Garibaldi

Building 3 ‘Gino Cassinis’ at the Politecnico Campus Milano-Leonardo will be the heart of SOTM: the venue, very fancy and antique, is part of the oldest complex of the university, inaugurated in 1927. It is located in a central neighborhood of the city, very lively (expecially in spring and summer) and full of green areas.

The building is very close to the University’s main entrance; all the campus is covered by WIFI and accessible for disabled people.

Piazza Leonardo da Vinci, freshly renovated square, is half covered by a garden where citizen and students have lunch or spend their spare time. The square is covered by free WIFI operated by Milan municipality.

The room can be connected via audio/video system with room 'Osvaldo De Donato'. This allows to create a "virtual space" of 530 seats without moving the people from one room to another.

All this four rooms are similar and have a capacity that swings from 88 to 132 seats. All the rooms have AC and LAN plug and are provided with two wheelchair accessible desk.

Area for lunch and coffee breaks

The suitable area for the reception/front desk, sponsors and the catering is located at the entrance of the venue.

Here a 360° photo of the hospitality, sponsors and catering space

The campus also have outdoor spaces that can host coffee breaks and lunch.

For the presentation sessions, it is also possible to use one of the four big rooms (400 seats) in Edificio 'Il Trifoglio', located 200m far from Building 3.

And here an immersive photo of the room

A separate document based on 'SotM bid template' has been prepared with info about the venue and catering prices.

Please, finally note that for SOTM2018 POLIMI will set up a GNSS test field useful for workshop and free GPS test.

Transportation / How to reach Milan

Going to/from/around in Milan is very easy: you can count on a capillary underground system, the surface public transportation (tram and buses) and several train stations linking downtown and the neighborhoods. Tickets are pretty cheap and it is also possible to rent a bike across the city (one big bicycle parking is just in front of the main entrance of the venue, Politecnico di Milano). There also many car sharing options (Car2Go, Enjoy, Share ‘N Go, etc,).

Located in Northern Italy, Milan is served by three airports, all well connected to the city center.

Milano Malpensa (MPX) is the main international and intercontinental hub, with direct flights from almost any European country, and very well connected to the main U.S. and Asian airports. It is located 46 km from the city center. Once you land, check the terminal you are into: there are two, both served by railway. To reach Milan city center, you can choose between the following options:

Milano Linate (LIN) is the city airport, located just 7 km from the city center, connecting Milan to most European capitals, among a fair share of national flights. Your options to reach the city center could be:

Milano Orio al Serio (BGY), located 45 km from the city, is the main hub for low-cost airlines (pro-tip: Orio is actually the city of Bergamo's airport, not Milan's).

National Railway system: Trenitalia and Italo. The main station (Stazione Centrale) is in the very heart of Milan and is connected through 2 underground lines, with fares up to 1,50 € per trip (discounts for multiple or daily tickets). There is a large taxi parking just outside the left exit. Most high speed and international trains arrive here. While you are there, pay attention to this masterwork of architecture, an unique blend of fascist monumental architecture, Art Deco and Liberty style.

Some international trains – mostly from Paris (TGV Italy-France) – arrive and depart from Porta Garibaldi, the second large city station. Porta Garibaldi is just five stops far from the event location (Piola) and two stops from Stazione Centrale. The advice here is to look as the newly built Porta Garibaldi skyscrapers, a new modern addition to the city center designed by Cesar Pelli.

Other route: several connections to Germany.