State of the Map 2019/Call for venues/Heidelberg

Welcome to the bid proposal page for hosting the State of the Map conference 2019 in Heidelberg. 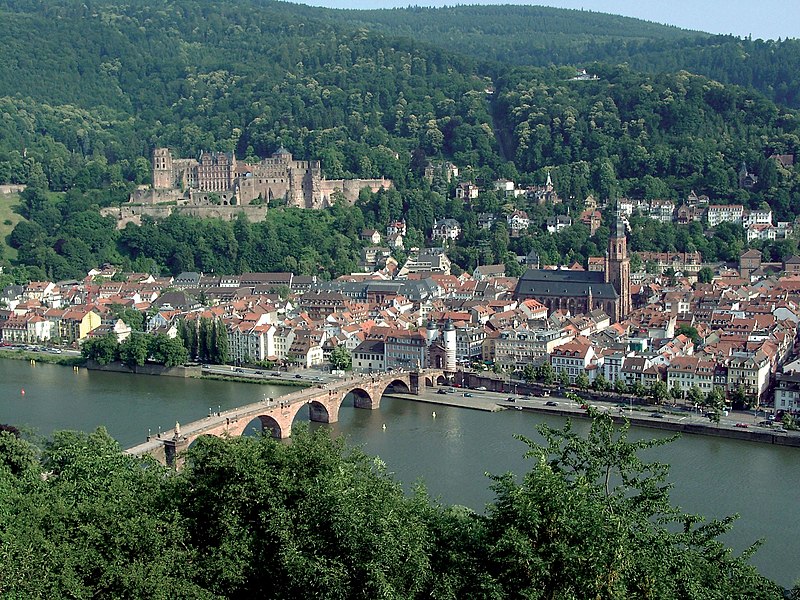 Heidelberg is a beautiful university town in south-west Germany with a population of around 160,000. It is located at where the river Neckar leaves the hilly terrain of the Odenwald and enters the Rhine Rift Valley. The town is famous not only for its scenic beauty, hiking possibilities and for richness of historic buildings but also for its university and other internationally renowned research facilities. Heidelberg University, founded in 1368, hosts the GIScience group which is heavily involved in OpenStreetMap. In addition to state of the art research about topics like quality indicators for VGI data (such as OSM), the institute has also produced a number of useful services for the OSM community over the years, for example OpenRouteService or the data analysis platforms OSMatrix and osmlanduse.org. Another focus is on the usage of OSM in humanitarian and disaster contexts, where the local "disastermappers" organize frequent mapathons. The associated Heidelberg Institute for Geoinformation Technology (HeiGIT), supported by the Klaus Tschira Foundation, allows to translate theoretical work directly into practical solutions.

Being located in the centre of Europe and having a community of very active local mappers, Heidelberg is representative of a region where OpenStreetMap is already a competitive alternative to other mainstream commercial map services, in some cases even being superior. OSM is used by many local organizations ranging from small companies up to the regional transport authority. This provides a stimulating environment for the exchange of ideas and for practice reports on the use of OSM.

Heidelberg is famous by international visitors as well as international researcher and students making it an easy to travel location for non-German speaking visitors. Long distance trains serve Heidelberg frequently, making it easy and convenient to reach from international travel hubs such as Frankfurt (located only 80km away) or Paris. The town offers a wide range of accommodation options for different budgets as well as a reliable public transport system.

Who are the local team?

The local team consists mostly of members of the HeiGIT project (which is part of the GIScience group of the university's geography department). Most of us are also active members of the OpenStreetMap community.

Our team members are

We propose to hold the conference in September 2019: Saturday to Monday 21th to 23th.

Subsequent to or preceding the chosen date for the State of the Map 2019, we do also offer to host the HOT Summit in Heidelberg.

Heidelberg University offers a number of possibilities to host conferences. The chemistry lecture halls at the campus "Neuenheimer Feld" best suit the requirements of the SotM 2019.

Located in the main university campus, the lecture halls of the chemistry department are quite spacious and are ideal for the conference tracks. The building has a large auditorium with room for up to 640 people, as well as two medium sized halls, each with a capacity of 200. In between these halls is an open foyer space, offering sufficient space to place stalls, communication corners and catering to serve food and beverages in close proximity to the lecture halls. Right outside of the building is a green area which can (should the weather allow it) be used for chats and informal discussions as well. Additional rooms for workshops or breakout sessions are available in the nearby buildings, for example in the "Mathematikon".

The venue location as well as all lecture rooms are accessible by wheelchair users. The Campus "Neuenheimer Feld" is located on the outskirts of Heidelberg centre, and is easily reachable from the whole city via public transport (two tram lines and two bus lines directly connect it to the rest of the city). Or if you don't mind some physical activity, it is also reachable by foot (e.g. 20 minutes from the main train station) or bike (e.g. 15 minutes to the old town). In the campus area additional amenities can be found: a botanical garden (to ease your mind), shops (to ensure that you have what you need) and several cafes.

This interactive map shows the venue location and relevant points of interest.

Heidelberg is located in the south-west of Germany, approximately 80km south of Frankfurt. Getting to and around Heidelberg is pretty straightforward thanks to an extensive public transportation network made up of local bus/tram/rail services and the national DeutscheBahn network which connects it to major airports.

Because of its location in between Frankfurt and Stuttgart, airports in both these cities are a good choice for international travelers, with the final connections from the airports to Heidelberg being possible through the German rail network.

Frankfurt Airport is Germany's busiest airport and offers many worldwide connections such as Vancouver, Buenos Aires, New York, Cape Town, Bangkok and Tokyo, to name just a few. From the airport, Heidelberg is reachable with a train via Mannheim in less than an hour.

Stuttgart Airport offers connections to cities mostly located within the vicinity of Europe such as Dublin, Lisbon and Istanbul, with many options provided by budget airlines. Getting to Heidelberg from Stuttgart airport is again possible through the rail network via Stuttgart main station in under two hours.

In addition to that, there are some smaller airports nearby, which provide low-cost connections (mostly to destinations in Europe), for example:

Heidelberg can be reached by train most easily via Mannheim main station where there are several long distance train connections (ICE, TGV, IC, EC) to stations in Germany and also to neighbouring countries (such as France, Belgium, Switzerland and Austria). From Mannheim it is a short 15 minute train ride to Heidelberg. There exist also a few long distance (IC, EC) connections direct from Heidelberg Main station to places throughout Germany and its neighbours.

You can find train connections to Heidelberg on the website of Deutsche Bahn.

Heidelberg can also be reached via car and with long distance bus services such as FlixBus.

The Heidelberg area is covered by an extensive public transportation network made up of buses, trams and local trains. Therefore getting between the train station, hotels and the conference venue would be easy. Public transport trips can be planed on the website of the Deutsche Bahn or by the local transportation association VRN.

Bike rental is possible at several places through the town. It is intended to increase the number of available bikes in proximity to the conference venue in cooperation with the bike rental companies. Cycling in Heidelberg is safe due to an extensive bike lane network - check the safe route option in OpenRouteService.

As a popular city for tourists, Heidelberg provides plenty of options for accommodation just a short bus ride or walk away from the venue.

Several hostels provide budget friendly rooms, with beds in a dorm from 20 € per night. A highlight is the youth hostel which is located closely to the conference venue, the zoo, the Neckar and the swimming pool.

Two campgrounds in Heidelberg offer a cost-effective alternative for overnight stays. The price for camping is about 15 € per night.

Airbnbs are available throughout the city from 25 € per night for smaller apartments, and can also accommodating larger groups.

Depending on your country of origin, you may need a Schengen visa. On the following link you can find more information about travelling to Germany: http://www.germany.info/visa

The city of Heidelberg offers free wifi hot spots (all university sites as well as many additional locations in the city) via the initiative “Heidelberg4you” (registration with mobile phone number is required).

German is (obviously) the primary language around Heidelberg, but owing to its large international draw, most people in and around Heidelberg speak very good English. There should be no trouble finding your way and organizing your daily business if you speak no German at all.