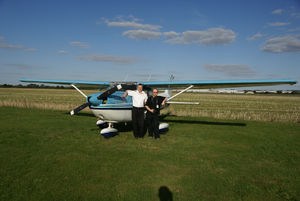 The plane and crew

The 2009 AGI conference was held in the town in September 2009. Prior to the conference aerial photography of the town was flown using a small plane chartered with funding from ITO World and Traveline. The photographer on board, OSM contributor JR Peterson, used a normal digital camera to take the photos whilst sat in the cockpit. This was as much a demonstration of what is possible than a serious attempt to cover an area.

The end result, shown as a background to Potlatch

Warning: This imagery layer is of "experimental" quality. Use GPS traces for road alignments.

In Potlatch, add the following url to your custom imagery source:

In Josm, use the slippy map plugin. Can anyone expand the instructions to use the url above?

Feel free to contact Gravitystorm if you have imagery of other places that you need processed.