From OpenStreetMap Wiki
Jump to navigation Jump to search
Tag:historic=gallows - Other languages

gallows is a structure designed for capital punishment by hanging. Gallows were abundant in Europe in past centuries but came out of use when death penalties were abolished. A gallows consisted of two or three pillars or piers, which where connected by a wooden traverse on which the rope could be fixated. Gallows were mostly built on hills outside the settlements. Many outlying gallows still exist because nobody cared to demolish them. However, most wooden parts did not stand the weathering. That's why typically only the piers made of stone or bricks are remaining. 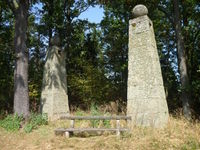