From OpenStreetMap Wiki
Jump to navigation Jump to search
Tag:natural=fumarole - Other languages

Fumarole is an opening in a planet's crust, which emits steam and gases. They are found in volcanic areas and geothermal fields.

Fumaroles are similar to geysers and hot_springs. There are a few key differences:

Examples of other geothermal features

Ideally, individual fumaroles would be mapped as a

Node. If the vent is large enough, you could use an

If you can not identify the locations of the individual fumaroles, you could draw an

Area to cover the whole area that appears to be steaming. This is not the recommended approach but is still acceptable. 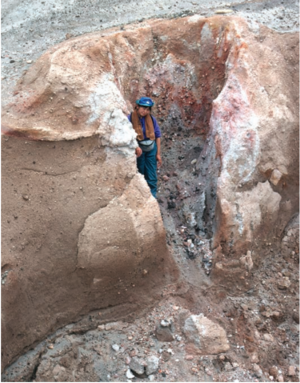 Inactive fumarole in the Valley of Ten Thousand Smokes

Fumaroles may become extinct, either as a natural process or if geothermal bores or power plants are constructed nearby. Extinct fumaroles should normally be deleted from OSM. In rare cases, if they are very significant they could be mapped as was:natural=fumarole.

geological=volcanic_fumarole
More details at taginfo
If you know places with this tag, verify if it could be tagged with another tag.
Automated edits are strongly discouraged unless you really know what you are doing!
Retrieved from "https://wiki.openstreetmap.org/w/index.php?title=Tag:natural%3Dfumarole&oldid=2235644"
Categories:
Hidden categories: