From OpenStreetMap Wiki
(Redirected from Tag:oneway=no)
Jump to navigation Jump to search
Key:oneway - Other languages

The oneway tag is used to indicate the access restriction on highways and other linear features for vehicles as appropriate. This means that this tag should be used when this way can only be used in one direction by vehicles. Note that a no entry sign prohibiting entry from one side or across one point of the road, does not automatically imply that the entire road is oneway (look for oneway signs or road markings along the road).

oneway=no is used to confirm that (a part of) a street is not a oneway street. (Use only in order to avoid mapping errors in areas where e.g. oneway streets are common, or to override defaults.)

Faux oneway streets (German: Unechte Einbahnstraßen) are a concept in some countries which refers to two-way streets which have a no entry sign at one end. These can be identified by their lack of oneway sign.

There are two alternatives of how to map this:

Oneway can be used in conjunction with vehicle type in order to tag exceptions. I.e. oneway:moped=no for a one-way streets where mopeds are allowed to drive in the opposite direction, oneway:bicycle=no for bicycles. Use cycleway:left=* / cycleway:right=* / cycleway:both=* to detail bicycle infrastructure or use the older cycleway=opposite/opposite_lane/opposite_track, see Bicycle for examples. See Key:access for other possible sub-values. 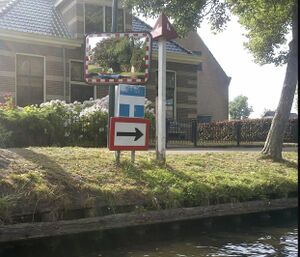 flow_direction=both was used on natural waterways and pipelines to tag that flow can happen in both directions.

Not all current usage reflects the above theory. For example, in late 2021 highway=path + oneway=* used on 32000 (out of total 72000) objects, oneway:foot=yes on 550 (out of 2200 total oneway:foot=* objects, mainly used as "oneway=yes + oneway:foot=no") and foot:backward=no on 110 (out of total 260), showing that some mappers consider oneway=* valid for all kinds of movement, including foot. On the other hand, there is a massive number of one-way streets tagged only with oneway=yes which are bidirectional for pedestrians. Data consumers could follow the vehicle-only theory in most cases but pay special attention and possibly deviate from that theory if oneway:foot=* is present or if oneway=* is set on a footway. Of course, data consumers may always decide to interpret tags however they deem suitable. 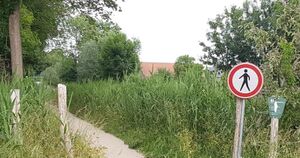