Contributions of Willett and Nicholas

information originally appearing on the main page, relating the origin and context of B. Willett's contributions --Ceyockey 11:27, 28 February 2010 (UTC)

I might just not be using my tools correctly ... I opened the .shp file in ArcExplorer 9.3 (Java viewer) and I couldn't get information to appear as maptips, such as names / descriptions. I had all of the related files in the same folder. Should a newer version of ArcExplorer be used, or is there something preparative which needs to be done to view file contents in ArcExplorer. (this could have gone onto the email lists - and probably should have). --Ceyockey 13:05, 28 February 2010 (UTC)

Is JAXA/ALOS imagery good enough for some things? 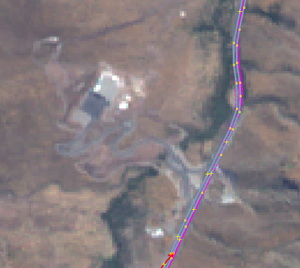 This is a shot from inside JOSM showing 188meter resolution around -32.92712x-70.68092. Perhaps good enough to note that there is a roadway bridge present and to trace some roadways and waterways? I agree, though, that the highest priority tracing and annotation isn't possible with this imagery. The roadway is visible under the drawn element and gps. --Ceyockey 18:02, 28 February 2010 (UTC)

(I did not do the copy&paste job .. just commenting) I just took a look at pre and post quake imagery in the same resolution and view. They both do seem to have the same low resolution. Also, they are out of register by a small amount (~10 meters or so, bad guesstimate) which doesn't make much of a difference, but if you want to do toggle-scanning (flipping between the two rapidly), you'll want to fine-tune the registration in JOSM. Also, the pre-quake imagery seems to be darker than the post-quake. Wondering if we can feed this back to JAXA by way of request to better match the two datasets? I'm not sure what is possible in this area.

There seems to be a whole lot of useful information on the linked page, but to me this is very cluttered and I can't find my way through it. Can somebody expand the information in this wiki and point to the really usefull stuff? I think useful would mean:

But right now all I can find are a dozen maps with circles to indicate the epicentres, and web-clients for satellite imagery that is as worse as landsat, and pdf files which are smaller than 400kB and thus will not contain that much information.

Also, it states For additional resources and imagery requests, please contact spaceaid@unoosa.org I'd like to know if someone from OSM has already contacted them, and told them about our needs and possibilities. I will come back to the computer in two hours, if there still is no more information, I think will contact them and document the communication right here. --Brian Schimmel 19:08, 1 March 2010 (UTC)

Thanks, Jgc, there's some nice information there, although until now, nothing really striking, since no high-res-map is available. --Brian Schimmel 01:07, 2 March 2010 (UTC)

It's me, once again. Above, I said I would contact spaceaid@unoosa.org if nobody indicated that they were already contacted. I read the article once again and this time it seems to me as if somebody had already contacted them, though I am not sure. I already drafted an email, but be aware that I did not send it and probably won't do because now I believe somebody already asked. But just in case someone else likes to contact them or contact anybody else, I'm sharing that draft here:

Yes Brian, I think they are aware of the needs. It is my understanding that the present limitations come from the image suppliers. --Jgc 21:37, 2 March 2010 (UTC)

The WMS-server mentioned now works in JOSM (have not tested Potlatch). I've added a way [1] to show the area covered by hires imagery around San Javier. Comparing with existing GPS tracks, the images seem to be off by a few meters, so try to adjust them first. Do we have a statement about legal usability for OSM tracing yet? --Lyx 08:15, 12 March 2010 (UTC)

Works indeed; turns out that I originally tried it in the area of Concepcion instead of Constitution.--Lyx 19:29, 6 March 2010 (UTC)

I think it would be useful to add an additional column resolution in order to identify the quality levels of each imagery source (could also be something like < than source X or an approximation if no exact value is available). At least we should include the information in the column image set. Comments? --Marc 10:42, 5 March 2010 (UTC)

Maybe some functional values like "building tracing", "major road tracing" and "variable", the latter to indicated that there are some areas suitable for fine work and others not. Also, it would be useful to indicate where cloud cover makes imagery useless ... maybe this should be part of the boundary relation? --Ceyockey 13:13, 5 March 2010 (UTC)

Yes please. I haven't really had time to look, but if we now have imagery which is good enough to do some serious tracing then there's lots of pages which need updating to make that clear. Wiki tip : DELETE the old sentences which are no longer true. :-) -- Harry Wood 14:49, 5 March 2010 (UTC)

I've started to include more information about imagery utility in OSM Trace Matrix; for instance, see http://projekte.eiops.de/osm-matrix/?zoom=16&lat=-36.62875&lon=-73.10852&layers=B0FFFFFFFFFFFT (square 15/9729/19971) and nearby. I've only done a few squares, but in principle, this could be done for all squares in a region. For practicality's sake, it would be useful to be able to select a group of squares and update information for all of them at the same time ... this is not in the current functionality of the tool, though. --Ceyockey 14:12, 6 March 2010 (UTC)

Technicaly the pre quake images could be online a few minutes after the quake. The satelite image producers want to earn money and it's very logical, that they can't give away all images for free.

To improve speed there should be money available to buy satelite images. There must also be some people that deside what to buy and they should be able to response very fast in case of emergency.

My understanding was that so far we haven't paid any money for these sets of imagery. Some of them may have only been released due to direct prompting by people from OSM, but I think many were just released by the imagery companies for free, for anyone to use (but with attribution requirements). I think with some of the Haiti ones there was a delay introduced while Mikel and others checked that it was OK for us to do our tracing from them. This needs to be checked since we're releasing with CC-BY-SA2, so no commercial restriction, also our type of attribution (wiki page mentions + loosely enforced 'source' tags) may not meet their requirements.
Maybe we should be looking into having pre-arranged agreements (covering future crisis situations) for contact channels, and agreement that we are allowed to do vector tracing with our license.
I imagine we should also try to give a mention of these imagery companies when we're doing blogs/write-ups/presentations about the crisis mapping. Also on map outputs even (see my static images for an example of this) though we must always be clear that this is not required attribution. That kind of promotion will encourage them/others to be forthcoming with imagery.
Could also look at spending money. The only time we've bought imagery so far was for WikiProject Palestine Gaza I believe.
More information in Mikel's Humanitarian OSM Team/Haiti Strategy And Proposal#Imagery. He makes the very good point that funding may be beneficial in helping restarting OpenAerialMap.
-- Harry Wood 19:41, 6 March 2010 (UTC)