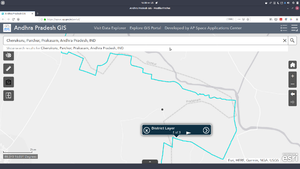 While investigating the location of a village Kottapalem, near Cherukuru, Parchur mandal, Prakasam district, I noticed that district boundary as used in OSM is different from district layer boundary used by the state space applications center (Search for Cherukuru and click on the solid boundary near it). When I looked originally the location of Kottapalem fell outside Prakasam district as shown in both OSM and AP SAC website. Thinking it is wrong, I moved it to make it fall in Prakasam district. Later I realised that District layer as used in APSAC actually might includes the original location. @User:Srihari_Thalla, @User:Naveenpf and others any suggestions on resolving these differences?--Arjunaraoc (talk) 10:59, 12 August 2019 (UTC)

With just a quick visual comparison with the district boundary on OSM, its quite clear that the OSM boundaries are very coarse and nowhere as close to accurate as the one used in the APSAC site. The ideal solution is to replace the OSM boundaries with fresh and accurate open data boundaries, but ttill that is available, it seems fine to manually shift the boundary to get the village on the correct side --Planemad/Talk 14:43, 12 August 2019 (UTC)
@User:PlanemadThanks for your input and advice.--Arjunaraoc (talk) 04:03, 13 August 2019 (UTC)

Hi Arjuna,we will get most accurate village,taluk and district boundaries after we complete this project https://bhunaksha.nic.in/bhunaksha/index.jsp (if it is made open). Till then which ever we feel is more accurate we can update that. -- Naveenpf (talk) 10:31, 13 August 2019 (UTC) 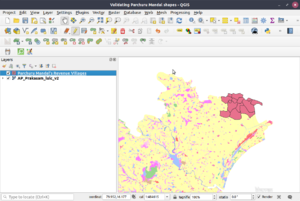 Most mapping approaches are top to bottom, i.e create state shape then its districts shapes, sub district shapes, revenue village shapes. Unfortunately districts shapes that are accesible have errors. In the last few years, Bhuvan has made available revenue village shapes through it servers. But these are available for viewing only at https://bhuvan-app1.nrsc.gov.in/bhuvan2d/bhuvan/bhuvan2d.php?l=52.17861328125&b=5.77880859375&r=111.02138671875&t=39.22119140625&val=m,0# at appropriate zoom level. [http://censusindia.gov.in/2011census/maps/atlas/28part32.pdf The maps provided by Census 2011(check page 80) were found to be inferior as even road segments were not properly captured which is essential for accurate georeferencing([https://www.openstreetmap.org/node/245633969#map=14/15.9680/80.2752 compare with SH way, whcih has sharp changes near Paruchuru on OSM) . Hence screenshot of revenue village borders were taken and were digitized after georeferencing. As the data is captured digitally, there is less scope for error. After all revenue villages are digitized, the mandal is digitized. This is validated by superimposing with published study maps of prakasam district from Bhuvan website available as webservice (see Figure). Though this approach is more time consuming, the accuracy will be far better than any other available approaches and will help deal with any changes to the administrative boundaries. --Arjunaraoc (talk) 09:52, 14 October 2019 (UTC)

The LULC layer was obtained with following info

While the Narasayapalem revenue village is not present in prakasam, it looks like even Gollapudi RV was dropped.

APSAC And NRSA seem to be using the traditional district boundaries when used as base layers when producing state level data products and not the actual boundary as per revenue village. The image shown here also omitted Gollapudi, as it was originally located as Garlapadu. It is now fixed in Open streetmap.

Query for subdistricts formatted for osmwiki

Use this query for subdistricts list formatted for osmwiki. Paste this definition line below as the first line of query, if you change the values interactively. 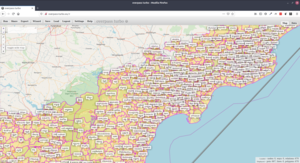 Announcing #AndhraPradesh Sub Districts (Mandals) #maps with #Telugu labels for the first time using @openstreetmap. For links to individual subdistricts https://w.wiki/BjK and for whole Andhra Pradesh map http://overpass-turbo.eu/s/NWB . Thanks to User:Heinz_V for all the work to add sub district shapes and to @OSMIndia @Wikidata @wikipedia communities for the help.--Arjunaraoc (talk) 05:36, 9 November 2019 (UTC)