Talk:List of US railroad subdivisions

Hello, thank you for your initial creation of this page and clear intent and passion you seem to have to more widely disseminate these data. However, I ask you to provide more specific of a source reference than "BNSF publishes a great map of their subdivisions." If a website, what is it? Are those data copyrighted? If so, they may not be entered here. I'm all for bettering rail data into OSM (I spoke on this topic at SOTM-US in Seattle summer of 2016), but only within the bounds of open data (not private corporate data which are copyrighted) and only if and as they follow the good tenets of our project like "don't copy from other maps."

Please discuss here your source(s) for these data, and we can work on strategies on improving this table, furthering efforts we might collaborate on together that might add yet more data here, and continue to better rail mapping in the USA. Thank you. Stevea (talk) 00:49, 20 July 2017 (UTC)

@Stevea: The list is 100 % manually sourced. Of course I copy the names of the subdivisions from official maps of the Class I railroads [later edit: This was a wish, only possible for BNSF].--Ethylisocyanat (talk) 10:48, 24 July 2017 (UTC)

1, there is no verb in your first sentence. 2, what is "manually sourced?" This means nothing to me. Does it mean the source of the names of the subdivisions IS from "official maps of the Class I railroads" or it isn't? And WHAT official maps? That is what I am asking you, WHAT maps? What is their URL if online? What is the website? You are not citing your source properly, so I am asking you once again to do so. Stevea (talk) 16:57, 24 July 2017 (UTC)

Ethylisocyanat, I have issues with each of the two links you present for UP and BNSF maps, for different reasons. The UP link leads to a page where various maps may be selected, but none of these presents subdivision names in UP's network. The BNSF link does present a PDF of a US network with subdivision names and without copyright. However, I'm not sure these data are compatible with OSM's ODbL. (Are you?) With absolutely no copyright on that PDF, and it being "freely available on the Internet" well, it may be ODbL-friendly. But I'm not sure. So, I ask you to please "sharpen focus" on where you are obtaining UP subdivision names. Stevea (talk) 18:50, 24 July 2017 (UTC)

@Stevea: I'm very sorry if you got me wrong and even thought, that I would illegaly import data into OSM. I'm not a native speaker and often first act and then explain.

I've indeed used the BNSF map, but the only information I extracted from it was the name of the subdivisions. I've linked the UP page just as reference, I haven't used maps from it at all.

I'm not a lawyer, but I can't believe, that the pure name of a subdivision is capable of being protected. This information is publicly available at many sources.

That you can understand me I will explain my process: 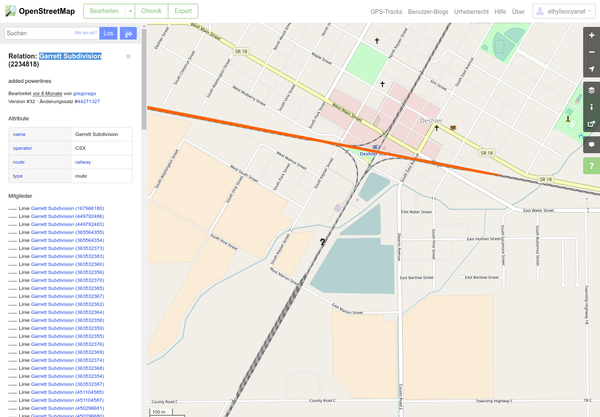 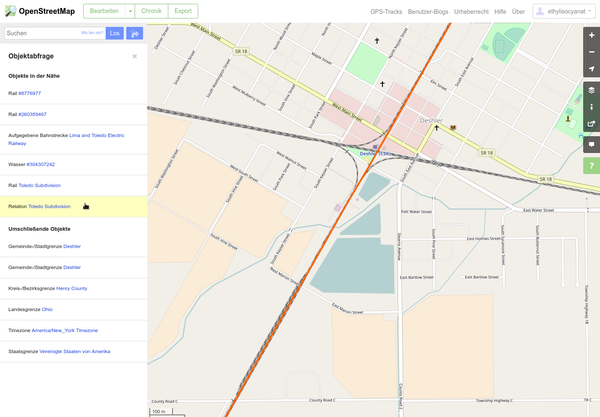 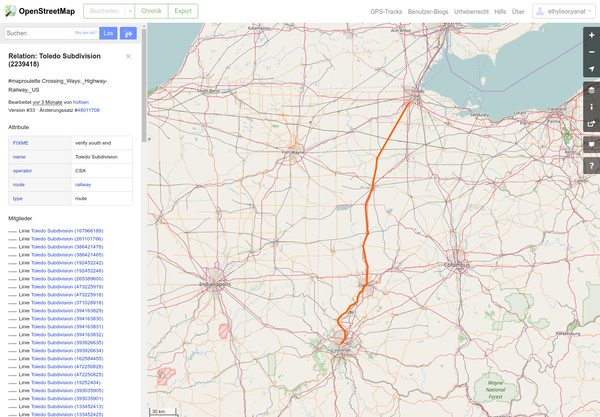 That's what I mean with "manually sourced".

And this all goes into my Calc sheet. To convert it to wikitext I'm saving it as CSV and converting it with csv2wp.

Thank you for that explanation! Now I understand that what you mean by "manually sourced" is that you are "deriving" the data DIRECTLY from OSM itself, rather than a BNSF map, for example. I know it seems a bit outrageous that "the simple name of a subdivision that everybody in the area seems to know" might not be enterable into OSM, but think about it for a minute: if you got that information because some railroad employee (perhaps wearing overalls and hoeing gravel!) at the train station told you "yes, the name of this rail line is Toledo Subdivision" well, that's OK to put into OSM. But, if you go to a website of BNSF and find a map with subdivision names AND that map says "Copyright BNSF" then THAT information can NOT go into OSM. That's the distinction I'm making. And since you pointed me to a BNSF map that does not have a clear copyright on it, I am tentatively OK with these data making their way into OSM. Please, be careful when you say "the information is available from many sources." That is not properly sourcing where the data came from. You really do need to specify exactly where it came from so that its compliance with OSM's ODbL can be verified. I'm not a lawyer either, but it is good for multiple OSM volunteers to be "looking over each other's shoulders" to make sure that we are following our own rules, that's all I was doing, and it wasn't meant to feel accusatory to you, rather to do our good "due diligence."

We can continue to work together to improve these data. For example, I'd like to see better column headers on your tables, so I might tune those up so they are more complete (to avoid abbreviations, which can be unclear or unambiguous). Again, thank you for your explanations and your passion! — Stevea (talk) 17:37, 27 July 2017 (UTC)

Ethylisocyanat, there are some super tools available to do what you would like to do. For example, the Overpass Turbo service lets you query the map directly using a powerful API. Try http://overpass-turbo.eu/s/qE0 and click the Run button: this is an example which displays a set (which may be copied, moved around, loaded into the JOSM editor...) of all of the ways and relations in the state of Connecticut that contain the name "Subdivision." You can build any query you like, anywhere in the map. Have fun! — Stevea (talk) 18:00, 27 July 2017 (UTC)

@Stevea: Thanks, I'm already using Overpass. The query is helpful, but because I'm building corridors I need to know, which route runs where. I also would like to exclude dead-end subdivisions and include those subdivision named Districts (NS). So I think I have to do it the manual way. Cheers, --Ethylisocyanat (talk) 00:51, 30 July 2017 (UTC)