Some photos for when people get round to doing Nottingham(shire)

These photos are taken from stops in Rushcliffe, those in the city differ slightly IIRC. 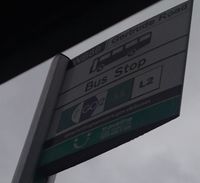 A typical flag on the bus stop showing the old code (WB66), Stop Name (Gertrude Road) and services leaving from the stop (11, LocalLink 2 (L2) - and actually 11C but that's unshown) 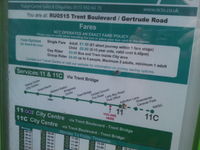 200px|thumb|Timetable and Full Code Final shot showing the remaining page of the timetable, and also the full code ????RU0515 - unfortunately out of focus - also shows the old code (WB66)

I've noticed that a newly installed stop has a panel with "text this code for times" on it - but no code!