Obsolete discussions threads and/or clarifications not directly related to the proposal are archived here to keep the main discussion thread clean.

Discussion about micromapping that has been initiated by following statement:

My intention - and I hope that is also the intention of others - for participation in this process is to establish an alternative to the mircomapping of lanes. The micromapping looks very attractive and intuitive for mappers (casual ones), but hiding the complexity of tags in a big number of ways -- also ignoring the additional complexity they get for solving the routing problems (which mappers sadly don't see as this is hard to visualize). --Martinq 10:59, 6 March 2012 (UTC)

Always the same "routing does not work with micromapping"-argument, which is only a matter of proper data preprocessing, so that it fits the use by the router. It is quite easier to throw away some data that is not needed, as trying to invent the reality from some abstract tags. --Fabi2 12:53, 6 March 2012 (UTC)

This is no micromapping discussion thread and my complexity/micromapping drawback statement was indeed over-simplified. But I assume people working on this proposal here are already aware of all advantages and disadvantages of micromapping, have understood the advantages of micromapping (which is very intuitive when you have aerial images), but also recognized that the example below is ultimately not "easier", "better understandable", "robust when edited" or "maintainable" compared to four simple tags like turn:lanes=left|... (or similar) on every side of the junction (many junctions are even simplier). I accept your decision (=prefer ways over tags). Please also accept that other people do not share your opinion and prefer tags -- and therefore want to establish a tagging schema here. 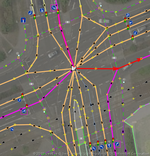 Update: This micromapping example is only meant as illustration how "complexity" in tags (for most junctions this "tag complexity" is an incorrect presumption) is exchanged by a complexity of interconnected ways. The exact micromapping approach/details does not really matter for this purpose.--Martinq 13:54, 6 March 2012 (UTC)

The point was the "inpossible routing", which was not an micromapping discussion before you hade made it to such a one. That the "visual approach"-proposal is far from being perfect until now, should be clear. I would made a grid of all the ways and leave out the central node in the middle of the intersection instead. The rest can be already read in my post above. --Fabi2 15:28, 6 March 2012 (UTC)

I have revoked my routing & micromapping statement (striked it out). I also want to clarify that we are talking about alternatives here, no "war on micromapping" (I recognized that "join our forces" has an aggressive undertone, which was not intentional).--Martinq 15:50, 6 March 2012 (UTC)

Votes cast before voting was cancelled.