From OpenStreetMap Wiki
< User:Cmuelle8
Jump to navigation Jump to search

The visual approach to map lanes and complex intersections

The method described here is most simple as it evolves out of established mapping practice. It does not propose new tags or a new tagging scheme. It rather combines existing features of OSM in a specific way. It delivers a general approach to map most complex intersections and their associated turn restrictions.

Mapping/drawing a star topology is simple:

How does it compare?

If you try to avoid a star topology on an intersection with 6x6 lanes, you'd create 36 intersecting points in a grid - maintaining turn restrictions would be a mess.

Not mapping individual lanes may decrease the visual complexity, base geometry of the intersection, but then you're stuck getting turn restrictions right. They would have to be re-invented or modified to express:

This has already been proposed as a consequence of some lane tagging proposals.

Mapping lanes individually preserves the simplicity of Turn restrictions. Having a single way in the from-role is slack. As a side effet it also allows for really complex cases, where it is preferable or necessary to thread in on a specific lane to make a correct turn at the intersection following the current, e.g.:

This probably only works well, if you have highres imagery available.

A routing engine should know where arbitrary lane switching is allowed: avoid useless artificial ways that interconnect lanes. So either:

Some day, routing engines and other tools in the osm universe might support sensible routing over area=yess, however this will not eliminate the need to map lanes individually. essentially, drawing 1 area instead of 1 way to represent all lanes will not give you more objects to tag different properties to. 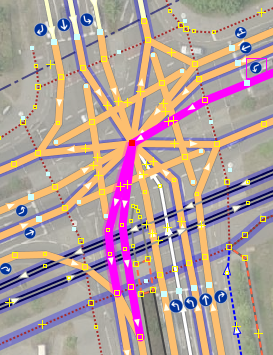 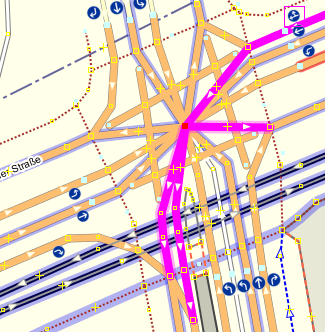 The current wide-spread use of TR has one important shortcoming - it limits the count of TO-members to one. In the following two cases, both the only_*_* and the no_*_* variants would benefit if this restriction is changed to 1+ (as is accepted for multiple via-role ways). This would aid a lot of real world situations.

The two examples of turn restrictions shown to the left and to the right are meaningful but invalid wrt the current Turn restriction proposal, since it asks for exactly one TO-role member.

Currently an intermediate way, between the center node and the opening of the second lane leaving south, is used to deal with this shortcoming.

Some variants that show differing approaches, additional things that could be mapped.

You are welcome to add to this table if you have a clever variant.

Please start out with the same intersection, so these approaches can be easily compared.