Feel free to use this page to discuss ways this proposal could be extended. Johnparis (talk) 03:41, 1 December 2018 (UTC)

In creating examples, I found it far simpler to restrict subnational claims to being within areas actually controlled by the claimant.

However, there is at least one case I know of where the claimant has drawn lines inside an area it does not control: Morocco has produced official provincial boundaries within the zone controlled by Sahrawi Arab Democratic Republic. 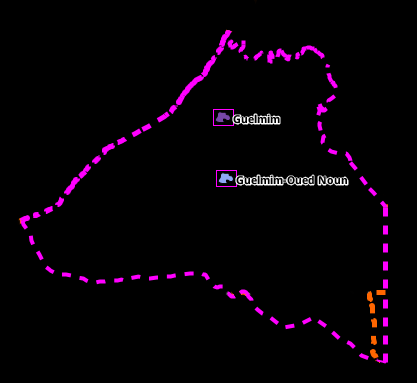 That section below and to the right of the orange line is imaginary. It is controlled by SADR, not Morocco. Here is one such line (https://www.openstreetmap.org/way/409267707) on the live map.

To me, this is unacceptable. I liken in to a situation where France redraws the borough lines in London and publishes them. No.

Of course people can map whatever they please, but not as part of this formal proposal. So any such extension should adopt the restriction that subnational claims may be mapped only within areas that a claimant actually controls.

Names and descriptions "according to"

This is a particularly thorny topic, but I believe an extension would be possible here as well.

An area can have names that differ depending on the claimant. For instance, SADR has named the collective area it controls the SADR Liberated Territories (or SADR Free Zone). It calls the entire Conflict Area the Sahrawi Arab Democratic Republic, not Western Sahara. And for Morocco, all those areas have no name; Morocco considers them an integral part of the country.

The difficulty is choosing a tagging structure that would not break existing apps. For instance, I thought of a few possibilities.

But unfortunately I think that any tag starting with "name:" will break one app or another. So I think maybe something like this:

The "noname" tag is more forgiving:

For descriptions, the same structure as "name_according_to" could be used with a "description_by" tag:

Viewpoints of third parties on claims

Some discussions have suggested tagging the claims to see who supports which claimants. I looked at that and found some problems:

In working on examples, I looked for a list of which countries support the UK or Spain in the Gibraltar dispute. No such luck. For the most part, countries do not specifically endorse or oppose territorial claims by other countries. The best you can find are vague resolutions supporting either "territorial integrity" or "the right of self-determination", which are usually code words for the opposite sides of the debate. You will rarely see someone saying "I support Country XX in its claim."

If such an extension is desired, the tag I would suggest would be something like sides_with or viewpoint_of:

This would produced 200 or so tags, one per country. Each key would have one value, chosen from among three options. This approach seems to be the trend these days.

An alternative would be to reverse the tag:

This would give three keys with up to 200 values separated by semicolons.

I would avoid use of the word "recognition" in these cases. Recognizing a country is related to establishing diplomatic relations with it. Acceptance of its territorial claims is an entirely different matter. -- Johnparis (talk) 13:48, 2 December 2018 (UTC)

I'm not persuaded. Take as an example the latest dispute that went to the OSM Institutions, Crimea. https://en.wikipedia.org/wiki/Political_status_of_Crimea#Others
I'm looking at the supporters of Russia. Exactly one, Nicaragua, according to the wiki, has specifically recognized Russia's claim. The other 26 used code words or were otherwise vague.
Now look at the supporters of Ukraine. Argentina, for example, has a vague statement that does not specifically recognize Ukraine's claim. Canada and Germany are pretty explicit in their support. Proxy resolutions in the UN (such as the US resolution condemning the plebiscite) are not the same as making an explicit statement one way or the other. Speeches from foreign ministers are often bluster. So of the first 43 nations on the list, I'd say maybe half a dozen are clear. Others would come up with different numbers.
And this is exactly the sort of thing that has led to editing wars on Wikipedia, and why I disagree with having the OSM data include a database of opinions about opinions, which is what this would be. (In one tagger's opinion, Argentina's opinion is to support Ukraine. In another tagger's opinion, Argentina's opinion is neutral.)
People who want to create their own database of opinions evaluating the different countries' opinions about the Crimea dispute are free to do so, and the facts they need to make a map from that database will exist in the OSM data under this proposal. The facts currently aren't there.
-- Johnparis (talk) 23:19, 3 December 2018 (UTC)

Yuri and I had a discussion about this on the US OSM Slack channel #borders. I will summarize the discussion from my viewpoint; Yuri can add his own.

One of the big problems I have with this tag is verifiability. Yuri cited https://en.wikipedia.org/wiki/Political_status_of_Crimea#Others as a resource. So I asked, Which side does Argentina support in the Crimea dispute? He answered Ukraine. Playing devil's advocate, I said, Wrong, Argentina is neutral. (Full disclosure: if he had said neutral, I would have said Ukraine.)

If you look at the Wikipedia page, you'll see Argentina is classified as a supporter of Ukraine. The facts are that Argentina abstained during the key U.N. vote in 2014, and subsequently its president made some comments condemning the plebiscite. That president is now out of office.

So we moved toward what an objective standard might be. In this case, it might be something like "How the country voted on UN General Assembly Resolution 68/262 in 2014. This assumption can be rebutted by subsequent official written statements from the country's foreign ministry." One problem would be, which resolution forms the basis of the objective standard? In the case of Crimea, there were subsequent UN General Assembly Resolutions 71/205 in 2016 and 72/190 in 2017. The results were different, but the wording was also different. So which to use as the basis?

Anyway, if those thorny issues can be resolved, I would suggest a tag along the lines of sides_with_source=*, which would have a URL pointing to a page on the OSM wiki defining the standards for that tag for that Disputed Area. The page could also list citations supporting the decision on the tag for each country. This would at least provide verifiability. I remain unpersuaded that it belongs in the OSM database, even if it can be verified.

This seems like a perfect use case for a third-party database. Map Company A uses the 2014 vote as its standard. Company B uses the 2016 vote. Company C uses the 2017 vote but updates it with news articles that it tracks. With the proposal in place, all three will be able use the facts in the OSM database to generate maps. Those maps will differ between the three companies because of the standards they choose.

The question of which standard to use is inherently subjective. And these issues are so contentious, it seems to me unlikely that "the OSM community" will reach a consensus.

I remain willing to change my mind (again).