Would static natural features like speed bumps be within the scope of this proposal? --Ævar Arnfjörð Bjarmason 18:22, 24 September 2008 (UTC)

No, there is already a feature for speed bumps, see Key:traffic_calming. This proposal is only interested in actions taken that might lead to charging or punishment of drivers which don't follow the rules. --Lulu-Ann 08:38, 25 September 2008 (UTC)

There's an additional "Why?" not mentioned in the proposal - navigation. I have several times given and received directions to people which say "After the speed camera, turn left." The speed camera is a notable feature useful for navigation purposes and should be mapped. Njd27 11:09, 25 September 2008 (UTC)

Any tag with a word "type" seems awkward to me, so wouldn't it be better to have

I've updated the proposal with tag=enforcement (enforcement_direction and enforcement_installation are refining the detail) rather than using highway=. This is in response to a lot of comments during voting that this would collide with highway=traffic_signals etc, plus requests that the highway tag doesn't become (even) more cluttered. Plus, to my mind, some types of enforcement are nodes not actually located on a highway (police hide in this bush here; speed camera vans are often parked in this car park; etc) Trs998 17:46, 17 October 2008 (UTC)

There is no need to worry about a tag 'namespace' being too cluttered. Although the use of highway=traffic_enforcement would not work if applied to an existing highway, it would work and be logically correct to describe a specific node representing a piece of highway furniture (eg a speed camera). Keeping highway furniture under the highway tag is imo a good idea. --Thomas Wood 20:44, 17 October 2008 (UTC)

Thomas, since you yourself acknowlege that any proposed tagging for these features which starts as highway ='value' "would not work if applied to an existing highway", and as pointed out by Eimai nodes with red light cameras usually are on the same nodes as highway=traffic_signals, so there would be problems there also. It's difficult to see how you can then go on to state "keeping highway furniture under the highway tag is imo a good idea". Dmgroom 10:07, 18 October 2008 (UTC)

I think it's important to show the direction one would be travelling in order for the enforcement to apply. For example, in the UK, we have "GATSO" cameras, which scan receding items, and fire a flash if they take a picture. We also have TruVelo, which don't flash, and only scan approaching items. We have SPECS, which register your position and time and then again after a few miles and check your average speed. Notably, all these enforcement_types only apply in one direction.

If I was driving north, approaching a GATSO facing south, I wouldn't need to be warned as it's incapable of checking my speed (approaching). If I was travelling south, then I would like to be warned, as I'd pass the camera and be scanned as I receded.

This is important information if a sat-nav type device wishes to warn users of speed traps - without the direction information, twice as many warnings would have to be given as non-applicable speed traps would be in the database, the information on which direction of traffic they apply to having been lost. I suggest we change enforcement_direction (or add another tag?) to the values ("north" "south" "east" west")

NB: if "one way streets" means ways, and I've got the wrong end of the stick here, please feel free to ignore this! We could use the direction of the way and simply use the proposed values... But I read that as meaning only ways with oneway=yes applied. Also using the direction of the way means it's subject to being broken as people often reverse ways when joining them (JOSM warns about oneway tags - could it also warn about enforcement_direction ? ) trs998 10:16, 28 September 2008 (UTC)

Thank you for making me aware of this! At first glance I thought we could use the direction arrow that is used for oneway streets for the direction, but this only works on ways.

I don't entirely agree with the way this tag is set up. I don't get the purpose of the mobile tag, because the police can be everywhere with their undercover police car. Also i am missing a tag for "trajectcontroles', which measure your speed over a long stretch, see http://en.wikipedia.org/wiki/SPECS_(speed_camera).

I would suggest we take a pragmatic view on this, in the same way as Wikipedia. The servers are (I believe) mostly located in the UK. Here, enforcement must be visible in advance, and generally hiding behind a bush renders a ticket void. There are anecdotes about people who have parked up opposite a van that was using greenery for cover and flashed to approaching drivers that were later prosecuted for perverting the course of justice. It may be illegal to use radar detectors, but it is not illegal to use a satnav with locations on them. From this:

Wikipedia carries a specific legal disclaimer which points out that information contained within it should not be construed as a definitive statement of the law, and those seeking such an opinion should consult a qualified solicitor. This is not to say that we can't have a note on the download page for an exporter saying things like "For legal reasons, users in Germany should un-select speed traps", but we should make it clear that it is not our responsibility to provide definitive legal advice. There are a wealth of legal grey areas in terms of contributing in general, and rather than exploring what we can and cannot do, we sidestep them such that they are no longer our problem. Chriscf 17:32, 26 September 2008 (UTC) 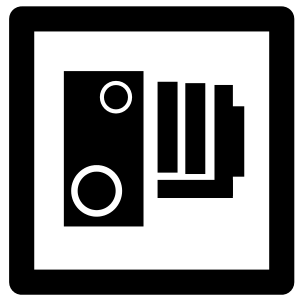 I've drawn a new version of the icon I had for uk fixed_speed_cameras (Gatsos, Truvelos, and the like) -

I would also suggest we have different icons for such things as average speed monitors (SPECS in the UK) and so on. If someone knows how to draw a spec warning I'll make a SVG version... but I don't believe I've seen a warning icon for it anywhere so am not sure what might be intuitive. Trs998 09:15, 5 October 2008 (UTC)

This sign is a little bit UK centric and would probably not be well understood everywhere, for instance the [French warning sign] is very different. It's a pity that there's no provision for national rendering rules in OSM. Pov 20:16, 25 October 2008 (UTC)

This proposal is far to vague on how to actually map these. Node on the street? Node close to the street? Part of the way? And why is it usable on areas? Please clarify. --Tordanik 12:50, 17 October 2008 (UTC)

This may be fairly obvious to others, but what are the element types matched with features? I assume that these are tagged on nodes, but enforcement_direction specifies "if used on a node", which implies that the other tags can be used on ways or relations. Since duplicate tag keys are going to be disallowed in API 0.6, should highway=traffic_enforcement be allowed on nodes only? --Matt 13:03, 17 October 2008 (UTC)